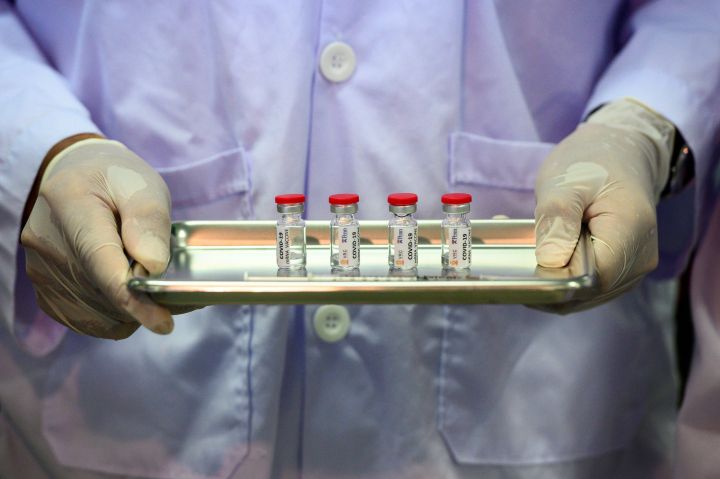 COPY
This picture taken on May 23, 2020 shows a laboratory technician holding a tray with doses of a COVID-19 novel coronavirus vaccine candidate ready for trial on monkeys at the National Primate Research Center of Thailand at Chulalongkorn University in Saraburi. - After conclusive results on mice, Thai scientists from the centre have begun testing a COVID-19 novel coronavirus vaccine candidate on monkeys, the phase before human trials. (Photo by Mladen ANTONOV / AFP) (Photo by MLADEN ANTONOV/AFP via Getty Images)
COVID-19

This picture taken on May 23, 2020 shows a laboratory technician holding a tray with doses of a COVID-19 novel coronavirus vaccine candidate ready for trial on monkeys at the National Primate Research Center of Thailand at Chulalongkorn University in Saraburi. - After conclusive results on mice, Thai scientists from the centre have begun testing a COVID-19 novel coronavirus vaccine candidate on monkeys, the phase before human trials. (Photo by Mladen ANTONOV / AFP) (Photo by MLADEN ANTONOV/AFP via Getty Images)
Listen Now

You can’t have one without the other, and for global transportation authorities, the COVID-19 vaccine development process is a crucial period to get a game plan together for how to distribute a drug to the entire world population.

Providing just one dose to 7.8 billion people would fill 8,000 Boeing 747 cargo planes, according to the International Air Transportation Association. Not only are there not enough of those cargo planes in existence, but a number of questions still remain unanswered: How many doses will one person require for effective preventative? Do the vaccines need to be kept cool or frozen when they travel? How will aid organization volunteers travel to begin vaccination programs?

Glyn Hughes, IATA’s head of cargo, is cosidering the answers to all of these questions.

He spoke to the BBC’s Victoria Craig on the global edition of Marketplace Morning Report, and explained the complexities of planning what he calls an unprecedented air lift.

Glyn Hughes: It actually starts with questions prior to the vaccine, which is what will the vaccine look like? Will it be a single dose or double dose or a triple dose vaccine? Will it need to be transported in a cool environment or will it needs to be distributed in a frozen environment? The second question is, is there a global capacity to manufacture that, so at the very least there will need to be a significant controlled harmonized and aligned distribution of the vaccine over a relatively short period of time because of course, once a vaccine is actually approved and certified for use, it’s critical that it gets out there as quickly as possible.

Victoria Craig: Clearly, a lot of variables go into planning an operation like this. How do you plan for that? What kind of work goes into making a plan with governments aid organisations, drug manufacturers to make this all possible?

Hughes: The world has never faced anything like this before. So there is no blueprint. There’s no handbook that somebody can pick up. This is where UNICEF, the World Food Programme, the World Health Organization who has had significant experience in humanitarian planning, together with the logisticians, the freight forwarders of the planet, who are used to doing global distribution networks, together with the airlines and their partners who will actually carry the majority of this we will need to sit around not a table but a series of tables to make sure that all the parties are actually harmonized on what it will take to ensure that there is the vaccine distributed to those who need it when they need it in the condition that it has to be in.

Craig: Travel restrictions and the plunge in passenger traffic has forced airlines to reduce the number of flights and routes they offer. How does that impact the effort to deliver vaccines?

Hughes: Hugely. It’s absolutely critical for global connectivity, sadly, cannot be provided by pure freighter aircraft on its own. We made a calculation that the total volume of vaccines will account for the equivalent of 8,000 747 freighters worth of commodity. Of course, there aren’t 1,000 747 freighters on the planet, so it’s going to require significant interconnectivity with passenger networks with cargo networks, sometimes with passenger planes as it’s happening now flying cargo. Even on the seats, even taking the seats out, so the industry will do what it can do to support. But it does need governments to harmonize and align on trying to safely open passenger transportation because that cargo capacity in the passenger planes will be crucial to help this global airlift when it actually commences.

Craig: Some regions will be easier than others to get vaccines to. And Africa will be one of the hardest places, what makes it so complicated?

Hughes: Several factors, number one, the sheer size of the geographical continent, the lack of freighter capacity that goes into the region. Now, the potential high temperatures, which again makes moving something as sensitive as a vaccine, which needs to be in a temperature controlled environment, you have to make sure that there’s an uninterrupted power supply. You have to also make sure that you’ve actually got volunteers in country to help disperse the actual vaccine. And this is where again, a lot of the aid agencies since the beginning of the COVID outbreak, have had to say spend some of their planned vaccination programs, clearly because of the lack of ability to get the product there, but also the lack of ability to get volunteers there. It’s a significant number of factors which we would hope by raising this issue now to work with the African Union, individual states and all those that can actually help and influence the preparation phase.