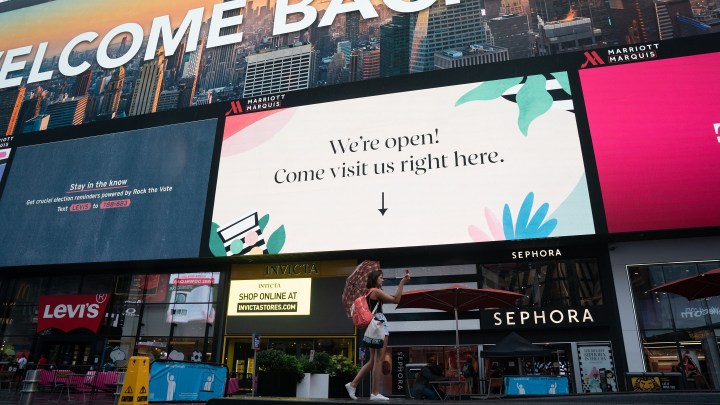 COPY
A lot of people who were on temporary furlough actually got their jobs back, including those in the retail sector. Bryan R. Smith/AFP via Getty Images
COVID & Unemployment

A lot of people who were on temporary furlough actually got their jobs back, including those in the retail sector. Bryan R. Smith/AFP via Getty Images
Listen Now

The U.S. unemployment rate fell sharply in August to 8.4%  from 10.2%, even as hiring slowed in August as employers added the fewest jobs since the pandemic began. Employers added 1.4 million jobs, the Labor Department said Friday, down from 1.7 million in July.

The U.S. economy has recovered about half the 22 million jobs lost to the pandemic.

Julia Coronado, president and founder of MacroPolicy Perspectives, spoke with “Marketplace Morning Report” host David Brancaccio. The following is an edited transcript of their conversation.

David Brancaccio: So you spotted right away who was doing a lot of the hiring. The answer is?

Julia Coronado: The census. So we were expecting the census to add a lot of jobs. These are temporary census data collectors. They added more than 200,000 jobs. If we look, excluding census, at the private sector hiring that was about a million jobs. That’s down from 1.5 million in July. So a little bit of loss of momentum and hiring.

Brancaccio: A little bit of a loss of momentum. And it looks like a lot of people who were on temporary furlough, but still tenuously connected to their old jobs, actually got their jobs back.

Coronado: Yes, that is still the story here. Lots of reconnections. The retail sector, for example, added 250,000 workers. So there is still lots of reconnections going on. And, in the coming months, what we’re going to be looking for is whether there are more permanent layoffs underway. We’re seeing lots of company announcements along those lines.

Brancaccio: What accounts for the unemployment rate falling to a lower-than-expected 8.4%?