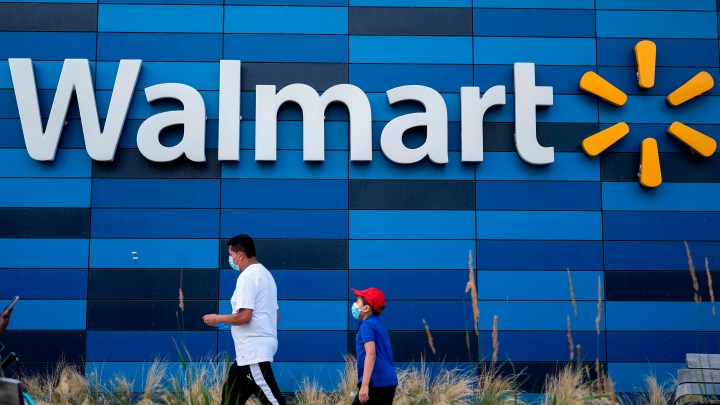 COPY
People walk past a Walmart in Washington, D.C. The company's sales surged in the second quarter. Andrew Caballero-Reynolds/AFP via Getty Images
COVID-19

People walk past a Walmart in Washington, D.C. The company's sales surged in the second quarter. Andrew Caballero-Reynolds/AFP via Getty Images
Listen Now

Walmart reported earnings Tuesday, and the retailer is killing it. E-commerce sales are up 97%, and same-store sales are up 9.3% in the second quarter. It looks as if Walmart is doing something right in this pandemic economy.

If retail in America is a giant consumerism pie, then Walmart’s slice is getting bigger.

Part of Walmart’s success has to do with what it is selling: essential goods that people still buy during a pandemic, like groceries. Walmart’s food operation is huge at $184 billion in sales last year, nearly one and a half times Kroger’s sales.

“Anywhere between 55% and 60% of Walmart’s business would normally be consumables,” O’Shea said.

The other key to Walmart’s success — probably the bigger key — is the many way in which Walmart sells. It provides online ordering, delivery, pick up at the curb and in-store shopping.

“They made a full-court press on e-commerce very successfully,” said Sayan Chatterjee, a professor at the Weatherhead School of Management at Case Western Reserve University.

However customers want to hand over their money, Walmart was ready even before the pandemic. Finally, Walmart has something else to thank for its success, according to Andrew Lipsman, principal analyst at eMarketer. That would be the government.

“Government stimulus checks and unemployment assistance — those dollars are probably more likely to get spent at Walmart than at any place else,” Lipsman said.

Lipsman added Walmart’s success is emblematic of a bigger trend in the pandemic. It’s the biggest stores that have been able to lean into the moment and adapt. Smaller and medium-size businesses are buckling.