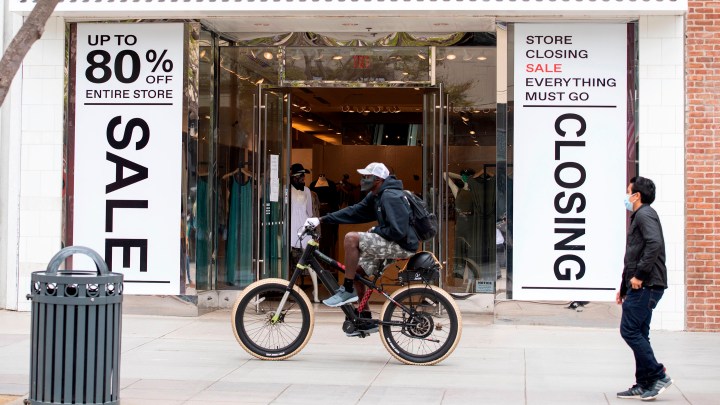 COPY
The Commerce Department’s estimate of the second-quarter decline in GDP marked the sharpest such drop on records dating to 1947. Valerie Macon/AFP via Getty Images
COVID-19

The Commerce Department’s estimate of the second-quarter decline in GDP marked the sharpest such drop on records dating to 1947. Valerie Macon/AFP via Getty Images
Listen Now

The audio attached to this post features an interview from the “Marketplace Morning Report” with Diane Swonk, chief economist at the tax and advisory firm at Grant Thornton.

“What’s important is the losses were so broad-based,” she told host David Brancaccio. “We saw them in every single category, even in government spending where increases at the federal level offset declines at the state and local levels, which were quite steep.”

The U.S. economy shrank at a dizzying 32.9% annual rate in the April-June quarter — by far the worst quarterly plunge ever — when the viral outbreak shut down businesses, throwing tens of millions out of work and sending unemployment surging to 14.7%, the government said Thursday.

The Commerce Department’s estimate of the second-quarter decline in the gross domestic product, the total output of goods and services, marked the sharpest such drop on records dating to 1947. The previous worst quarterly contraction, a 10% drop, occurred in 1958 during the Eisenhower administration