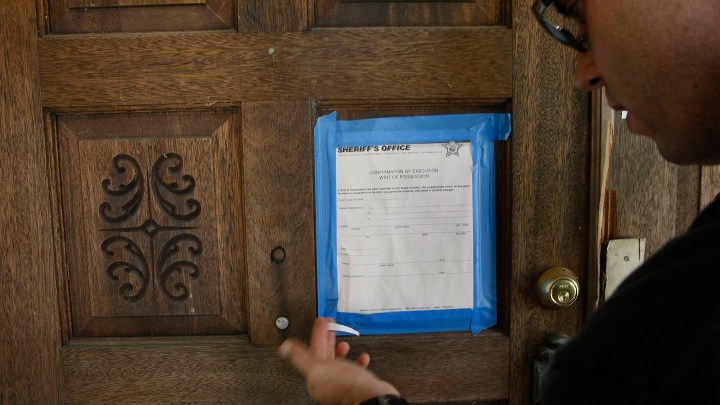 COPY
A sheriff's eviction notice is posted on the front door of a property in Florida. Even if a court filing doesn't lead to an eviction, it can stay on a tenant's record. Joe Raedle/Getty Images

A sheriff's eviction notice is posted on the front door of a property in Florida. Even if a court filing doesn't lead to an eviction, it can stay on a tenant's record. Joe Raedle/Getty Images
Listen Now

We are nearing the end of the month, and for millions of Americans, things are looking grim. Unemployment is high, and pandemic eviction moratoriums have expired in states across the country.

According to the Urban Institute’s analysis of Census Bureau data, around 20% of renters did not pay their full rent in June, which has experts warning of a “tsunami of evictions.” And as many people already know, eviction is something that can haunt a person’s life for years.

For instance, getting evicted can make it hard to rent again.

“We’ve spoken with property managers in a number of states who have told us point blank that they won’t rent to someone who has been filed against for eviction,” said Peter Hepburn of the Princeton University Eviction Lab. “And it doesn’t even matter whether they were actually evicted, just whether that eviction process was started.”

One problem is that many landlords screen prospective renters using data collection agencies that put an eviction court filing on a tenant’s record, even if that filing never led to an eviction. Depending on the state you live in, once it’s on your record, it’s not going away.

Diane Yentel from the National Low Income Housing Coalition said the stigma of an eviction on record means tenants “end up usually having to rent in less-desirable neighborhoods, because those are the landlords that will take them. So there’s this spiraling down into poverty that can happen from just one eviction filing.”

Advocates are warning that millions more Americans who cannot pay rent could find themselves in that spiral soon.