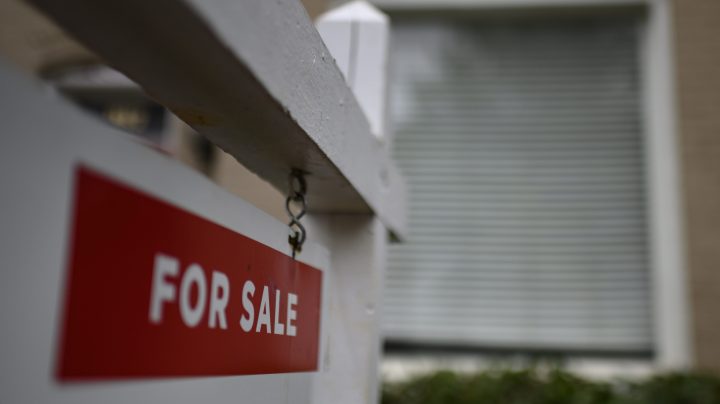 COPY
A for-sale sign outside a house. Sales of existing homes jumped in June. Eric Baradat/AFP via Getty Images

A for-sale sign outside a house. Sales of existing homes jumped in June. Eric Baradat/AFP via Getty Images
Listen Now

There’s at least one bright spot amid all of the worrying signs in this economy: the housing market. Sales of existing homes jumped by almost 21% in June, according to the National Association of Realtors, and mortgage applications rose by 4% percent last week, according to the Mortgage Bankers Association.

It also appears that a strong housing market has a ripple effect on a hurting economy.

“And then of course when you buy the home, you’ve gotta move there, so you’ve gotta contract out with some movers, and …. you’re going to buy some new furniture and home furnishings,” he said.

And with mortgage rates near 3%, a lot of homeowners are refinancing their existing mortgages.

Adam Levitin at Georgetown University said that frees up money they can spend elsewhere.

“That’s good for the economy, right? It means that they’re not just sinking money into their house, they’re now able to go and do home improvements, they’re able to buy a new car,” he said.

However, Levitin said low rates don’t necessarily help prospective buyers. That’s because lenders are worried about COVID-19’s effect on the economy and have been tightening standards.

“If you can get a mortgage, that’s wonderful, but it’s going to be harder to actually qualify for one,” he said.

There also aren’t a lot of homes for sale right now.

Lawrence Yun, chief economist at the National Association of Realtors, said for the homes that are available, we’re seeing backlogs of buyers.

“Because of the lack of inventory, prices are getting pushed up faster than overall inflation or people’s wage income,” he said.

Whether or not you can benefit from this housing boom depends on whether you’ve been able to keep your job during the pandemic, said Paul Habibi of the Anderson School of Management at the University of California, Los Angeles.

“This has really exacerbated a lot of the disconnects we’ve already had in the market with respect to affordability and homeownership,” he said.

Habibi added that roughly one in four homeowners weren’t able to make last month’s mortgage payment. Lenders have been lenient, but Habibi noted that will only play out for so long.