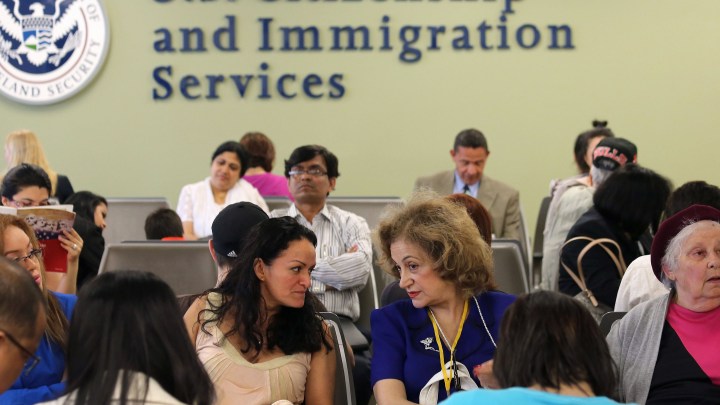 COPY
In this file photo, immigrants await their turn for green card and citizenship interviews at the U.S. Citizenship and Immigration Services (USCIS) Queens office on May 30, 2013 in the Long Island City neighborhood of the Queens borough of New York City. John Moore/Getty Images

In this file photo, immigrants await their turn for green card and citizenship interviews at the U.S. Citizenship and Immigration Services (USCIS) Queens office on May 30, 2013 in the Long Island City neighborhood of the Queens borough of New York City. John Moore/Getty Images
Listen Now

Suraaj Vyas came to the United States in 2002 to get a master’s degree in computer science at the University of North Carolina, Charlotte. He’s been working under an H-1B visa since 2005. He got tentative approval for permanent residence in 2009 and has been waiting for his green card ever since.

“After a certain period of time, we just stopped looking,” he said.

Vyas and his wife, Garima Purohit, have two daughters born in America. Purohit is a dentist, and together they own their own practice in York, Pennsylvania, where they employ seven people. Vyas still works in IT and has to renew his visa every couple years.

“There is like a sword hanging [over your head] all the time because unless you get your green card in your hand, you never know,” he said. “What happens if your H-1 gets denied next time?”

Manan Shah, a data specialist in Austin, Texas, is also waiting for his green card, but he’s got a more pressing concern right now: He needs to visit his father in India who has cancer. Shah’s waiting for immigration officials to give him documentation that will allow him to get back into America.

“If they’re already backlogged and if they remove people, my worry is it might even cause further delay,” Shah said.

In a lot of ways, Shah’s experience is typical.

The federal agency that administers the legal immigration system, United States Citizenship and Immigration Services, is funded by fees. As immigration applications have dropped, the agency is running out of money. USCIS said it will have to furlough two-thirds of its staff unless Congress sends $1.2 billion its way by the first week in August.

“To be an immigrant in this country is to shift from one anxiety to the next,” said Allen Orr, president-elect of the American Immigration Lawyers Association.

He said the USCIS budget is dire because it has discouraged new applicants, doubled the amount of money it spends on fraud prevention and tripled what it spends on vetting.

“So the shortfall right now with the budget is from mismanagement of the government by imposing new regulations that weren’t needed,” Orr said.

The agency also made it more expensive to apply for a visa, raising fees earlier this year to try to make up for fewer applications.

Richard Burke, CEO of Envoy Global, a firm that helps companies navigate the visa process, said companies are willing to pay those higher fees but just want certainty. Employers are worried that a reduction in USCIS staff could mean they don’t get the workers they need.

“Those that we serve view this as an entirely self-inflicted wound, and the consequence is just another challenge as these companies trying to rebound from COVID and seek to hire the best and brightest,” Burke said.

Without intervention from Congress, the shortfall threatens to put 13,400 USCIS employees on furlough beginning Aug. 3.