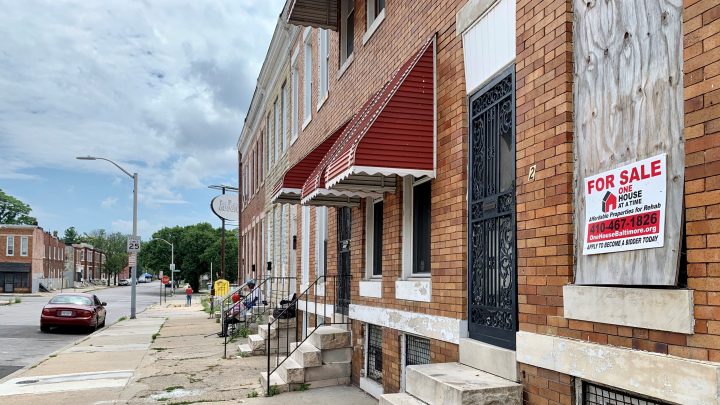 COPY
A vacant house is for sale on North Payson Street in Baltimore. In 2016, an abandoned building down the block collapsed and killed a man. Amy Scott/Marketplace
The Block

A vacant house is for sale on North Payson Street in Baltimore. In 2016, an abandoned building down the block collapsed and killed a man. Amy Scott/Marketplace
Listen Now

There was a time when you could often find Thomas Lemmon sitting in his beloved car on North Payson Street in West Baltimore, where century-old brick row houses line the block. The car was a cream-colored, 1989 Cadillac — almost a block long itself — with a red top and matching interior.

“He used to love to sit in his Cadillac and listen to his radio in his car,” said Joseph Snowden, a former neighbor.

One spring afternoon four years ago, Lemmon was doing just that, parked alongside a vacant row house, listening to oldies.

“It was real windy, and the wall just collapsed,” Snowden said. “Collapsed right down on the car.”

Two stories of brick buckled and rained down on the Cadillac, smashing the windshield and flattening the roof. Snowden heard the boom from half a block away and ran to help.

“By the time I got over there, there was a whole bunch of kids and they had cleaned all the bricks off the top of it,” he said. “I took my back and I tried to lift up on the top of the car, to push it up, to get the man out of there, but we couldn’t get him out.”

Lemmon died in a hospital that evening. He was 69 years old. On display at his funeral was a red and white wreath in the shape of his cherished Cadillac.

The tragedy was shocking, but not surprising. Neighbors had complained about the abandoned house, which the city had condemned nine years before.

“It’s emblematic of Baltimore on so many levels,” said Carol Ott, a longtime fair-housing advocate in the city. “The man who was killed was Black. The house was located in a majority Black neighborhood that has suffered from disinvestment and redlining and predatory real estate practices.”

Practices that, over the decades, have hollowed out large swaths of Baltimore, leaving blocks of 10 and 20 row houses where all but a few are vacant. The building that killed Lemmon had been bought in a city tax sale by investors who’d let it sit empty for nearly a decade, Ott said. Last year, Lemmon’s family won a $1.3 million civil judgment against the investors.

Across the country, there are more than 6 million vacant and unused housing units, according to census figures. Many are in rural communities and Rust Belt cities, like Baltimore, that have been losing population for decades.

“Vacant properties don’t cause poverty,” he said. “They don’t cause crime … and all the other ills of urban neighborhoods. But they make all of that worse.”

They become dumping grounds for trash and havens for drug dealers. In Baltimore, dead bodies have even been found inside.

“They are incredibly destructive to people’s sense of hope, quality of life, aspirations, home value — all of these kinds of things,” Mallach said.

After Lemmon’s death, the city rushed to tear down hundreds of other derelict buildings near collapse. But the overall number, more than 16,000 vacant buildings, has barely budged for a decade. And that’s the official count. Other estimates are even higher.

Since Housing Commissioner Michael Braverman took charge in 2017, the city has torn down more than 2,000 additional vacants. Grants and tax incentives have helped homeowners and developers rehab thousands more.

That’s because, overall, more people are leaving Baltimore than coming. A city built for nearly 1 million people at its peak in 1950 is now below 600,000.

Tearing down an individual row house is expensive and complicated because people may be living next door. Braverman said it would cost a few billion dollars to rid Baltimore of its vacancy problem.

And now there’s the coronavirus pandemic. Demolitions have been on hold since April, and cities like Baltimore are losing tax revenue due to the economic toll of the crisis.

“The amount of money available to do this kind of work is going to diminish,” Braverman said.

That endangers even the slow progress that has been made in places like West Baltimore’s Harlem Park, a historic Black neighborhood where one of every three houses is vacant.

On a recent afternoon, Matthew King was there handing out boxes of food and supplies to residents. King started the Harlem Park Community Development Corp. a few years ago to help revitalize the neighborhood.

“Take a bottle, do the census,” he reminded people as they accepted free water bottles and squirts of hand sanitizer.

Black communities like King’s have been disproportionately hurt by the economic and human costs of the pandemic. Still, he was optimistic that the current national spotlight on racism and police brutality might be a catalyst for transformation.

Blocks away, where Lemmon was killed four years ago, his former neighbor Joseph Snowden said he has seen some progress. A few years ago, he reported a hazardous building to the city.

“The wall was leaning out, and I was scared that the wall was going to collapse and fall down on a child going down to the playground,” he said. “They came that evening — tore it down.”

Now his house sits next to a vacant lot, with soda cans and water bottles littering the knee-high grass. Still, he said, that was better than a shell of a building.

People burglarize vacant buildings, he said. “Sometimes they go in there and set fires and stuff like that, so I think it’s better that it’s gone.”

Snowden remembers when every house on his block was occupied. Now he’s one of just three homeowners left. But after more than 60 years he’s not going anywhere, he insisted.

“I was born and raised right here,” he said. “Wherever you go, there’s trouble going to be there, too.”

So, what was a for-sale sign doing in his window?