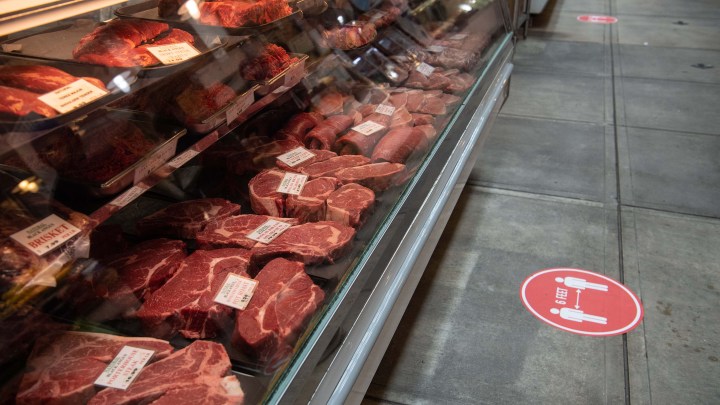 COPY
"Everybody has to pay for climate damages, and many people in the states have to pay privately for health care. So it would make much more sense if they saw those costs in the prices of foods that are really related to those impacts," Marco Springmann says. Nicholas Kamm/AFP via Getty Images

"Everybody has to pay for climate damages, and many people in the states have to pay privately for health care. So it would make much more sense if they saw those costs in the prices of foods that are really related to those impacts," Marco Springmann says. Nicholas Kamm/AFP via Getty Images
Listen Now

For years, researchers have been working to find financial tools to curb bad behavior. We often refer to these as “sin taxes,” like what you see on cigarettes and sugary drinks in some cities in the U.S.

The Farm Animal Investment Risk and Return (FAIRR) initiative is out with a new study that’s warning its investors that a tax on red meat is imminent. Marco Springmann, a researcher at the University of Oxford, spoke with Marketplace’s Andy Uhler about the details. The following is an edited transcript of their conversation.

Andy Uhler: Do we have a sense of the sort of momentum for this sort of thing? Is it specific to European countries?

Marco Springmann: Yeah, specifically in Europe, the discussion is gaining momentum. There had been a saturated fat [tax] at some point in Denmark, which was basically like on meat, eggs. Fortunately, that had been abolished after a short while because the information campaign was really not very well thought-out, one could say. But it was a couple of years ago. And I think [with] the experience of sugar taxes and levies around the world, public health groups have really learned how to really communicate clearly that it’s about the health of populations.

Uhler: But you’re right, so much of this is sort of about the marketing or about the messaging of exactly what the tax would be trying to do. I think you’re right, the sugary drinks tax here in the United States raised a lot of eyebrows, but at the same time made a whole lot of sense. I think if the messaging makes sense to the general public, that’s that’s sort of where you win, right?

Springmann: Yeah, exactly. I think the important thing to keep in mind there is really not to take stuff away from consumers, but to provide that clear signal of, “OK, if you want to consume this product, then please pay for the full costs that otherwise [are] basically put on society without the direct link, right?” I mean, everybody has to pay for climate damages, and many people in the states have to pay privately for health care. So it would make much more sense if they saw those costs in the prices of foods that are really related to those impacts.

Uhler: It would also be a heavy burden for those meat producers, right? Would meat companies just have to bow out?

Springmann: Well, in our model, we sort of have a direct link between consumption and production, so we would see a reduction in production as well. But, here, it’s always important that if you design this policy well, then it shouldn’t be to the detriment necessary of producers. The good thing with a tax instrument is that you actually raise revenues and those revenues you can use to, for example, provide those incentives and help livestock producers diversify their portfolio, and also for running information campaigns for consumers.

Uhler: But at the same time that diminished production would in fact lead to less emissions, yeah?

Springmann: Yeah, that’s correct. So, in all countries where we see a reduction and substitution of animal source foods, we also find a reduction in emissions. And that is indeed very important, as recent reports have highlighted the food related emissions account for up to a third of all greenhouse gas emissions. So they are major driver of climate change.