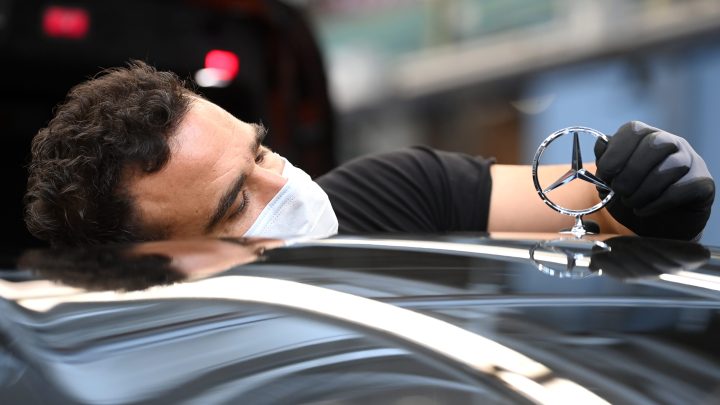 COPY
A worker wearing a face mask at a Mercedes-Benz factory. A Mercedes plant in Alabama suspended production because it can't get the necessary parts from Mexico. Matthias Hangst/Getty Images
COVID-19

A worker wearing a face mask at a Mercedes-Benz factory. A Mercedes plant in Alabama suspended production because it can't get the necessary parts from Mexico. Matthias Hangst/Getty Images
Listen Now

The auto industry returns to work this week. Automakers in the U.S. are opening at partial capacity, which means about half the workforce will be back at work. That comes out to around 130,000 people back on the job.

Thing is, to make an American car, you need loads of components from Mexico, which got hit by the pandemic well after the U.S. did.

Still, the pressure is on for Mexico to join the North American supply chain ASAP.

A typical part in a U.S.-made car has crossed the border into Canada or Mexico eight times before final assembly.

U.S. automakers depend so much on Mexican partners that they’ve waged a pressure campaign for them to restart, according to Duncan Wood, director of the Mexico Institute at the Wilson Center think tank.

“They have spoken to the Mexican government. They have spoken to business associations in Mexico,” Wood said. “We’ve also seen through the State Department stronger and stronger messages, saying that Mexico needs to think about the ways it thinks about cooperating with North American partners.”

“People are literally sitting within 2 to 3 feet of one another because you’re passing an assembly product down the line,” Burris said.

And in Mexico, the virus hit later than in the U.S. So cases are still going up.

“We are behind in terms of getting our highest number of cases. At least a month behind, compared to New York City,” said Fernando Alarid-Escudero, assistant professor at Mexico’s Center for Research and Teaching in Economics.

So for all the risk, can the North American auto supply chain put itself back together safely and quickly?

“They probably have enough inventory of spare parts to get them through the next 12 days. Any type of disruption to the supply chain is going to be short-lived at best,” Fullerton said.

He’s an optimist. Others aren’t so sure. In Alabama, Mercedes has halted operations because it can’t get the parts it needs from Mexico.