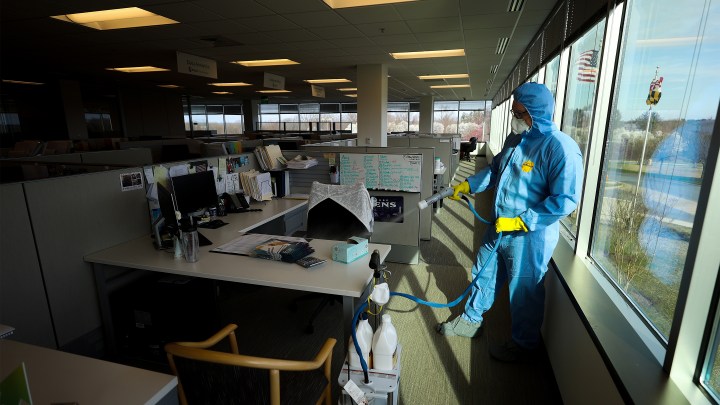 COPY
A worker disinfects workspaces in an office. Fewer workdays could reduce the number of people in one place at one time. Rob Carr/Getty Images
COVID-19

A worker disinfects workspaces in an office. Fewer workdays could reduce the number of people in one place at one time. Rob Carr/Getty Images
Listen Now

As businesses start to think about reopening, it’s becoming clear that work as we knew it is going to look a lot different: more empty space between people, more dividers and fewer shared touch points like door handles and elevator buttons. But it’s not just work spaces that might need to be redesigned. It’s work schedules too.

Think about the typical open office — those long tables crammed with workers practically on top of one another. Simply adding some plexiglass and masks is not going cut it. Many workplaces will need to find ways to reduce the number of workers in one place at one time.

“I do think the one-size-fits-all 9-to-5 is probably gone,” said Cali Williams Yost, a business consultant specializing in flexible work.

The sudden shift to remote work has already forced many companies to become more flexible, so blowing up the schedule is just the natural next step, said Alex Pang, author of the book, “Shorter: Work Better, Smarter, and Less —Here’s How.”

“This opens up a recognition that there are changes in the way that we work that maybe are closer to hand, are more accessible than we thought before,” he said, like working fewer hours altogether.

Pang said a four-day workweek with employees taking different days of the week off could help solve the short-term issue of staggering shifts. Research has found it can benefit business too.

“You can actually be just as productive or more productive. People are happier, work-life balance is better and recruitment and retention go way up,” he said.

Philadelphia software company Wildbit has been working a four-day week for years.

“The hypothesis was that we are spending a lot of our days on things that aren’t really valuable — just meetings, procrastination, inefficiencies, things like that,” said CEO Natalie Nagele.

She found productivity improved after the first year, with employees able to do better, more focused work when there was less of it.

With many schools closed, persistent uncertainty about child care and companies still figuring out how to retrofit their physical space, shorter workweeks and flexible schedules could become less of a perk and more of a necessity.