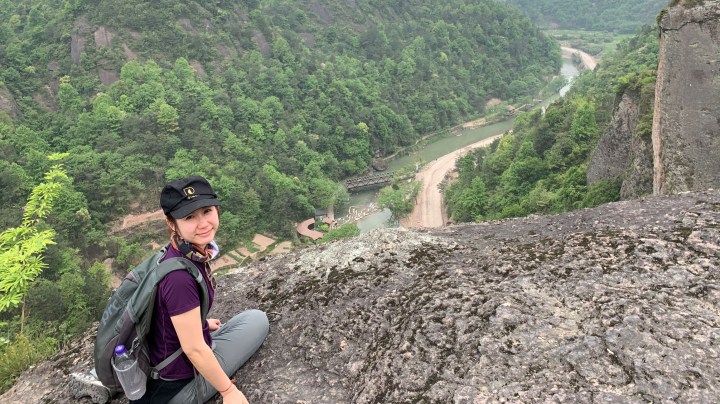 COPY
Marketplace's Jennifer Pak on a hike three hours outside of Shanghai. Before departing, she had to make sure she could return to the city without being quarantined. Jennifer Pak/Marketplace
COVID-19

Marketplace's Jennifer Pak on a hike three hours outside of Shanghai. Before departing, she had to make sure she could return to the city without being quarantined. Jennifer Pak/Marketplace
Listen Now

The Chinese financial capital, Shanghai, has officially been back at work since Feb. 10, after a near economic shutdown due to the COVID-19 virus pandemic. Not everything, however, is 100% back to normal.

Cars, bicycles, pedestrians and traffic jams have returned to Shanghai’s streets. My morning commute is not as lonely these days. During off-peak hours, there are now more than just a handful of people riding on the bus. It has been that way for the past couple of weeks.

On one commute, an elderly man across the aisle from me played a TV series on his smart tablet at full volume.

People are once again blasting videos, music or even singing out loud in public.

Still, there are reminders that the coronavirus continues to pose a threat. On every commute, all the windows are open. The stiff April wind blasts through the bus. Good ventilation is part of the central government’s measures to prevent the spread of the coronavirus.

I have been sitting in icy buses, offices and restaurants all through the wet and chilly Shanghai winter.

Face masks are still required before entering malls and office blocks or getting on public transport. However, virus prevention measures, such as fever checks at entrances, have gone from about half a dozen a day to sometimes none.

In parts of Shanghai, social distancing seems like a thing of the past.

On a public square in the suburb of Baoshan district, retired men and women dance to pulsing techno music playing from a portable loudspeaker. This is how a lot of elderly people, who live in tiny apartments, get their daily exercise.

Restaurants still in business have full patios on sunny weekends, although weekdays are still tough.

During lunch at a Thai restaurant, a server refills my water cup without asking. Shanghai’s service has always been among the best in China, but lately, restaurant staff seem to be extra attentive.

After the meal, a server at the Thai restaurant said if the food was good, I should leave a review on the Dianping app, which is similar to Yelp. In exchange, he said he would give me a free dessert.

He did not check if I had posted a review before setting down the coconut sago pudding in front of me.

Businesses have the added pressure of being punished if they do not screen for coronavirus carriers.

Some depend on a city health app that assigns residents a color QR code: green, yellow or red.

Mine is green, which essentially means I’m coronavirus-free and can move about as I like.

The app states that it uses government data to assess our health, but it doesn’t specify which data exactly.

At a shopping mall in the trendy Xintiandi district, I show my green QR code before the security guard will take my temperature. Once he is sure I don’t have a fever, I am allowed in.

However, not all places will accept the health QR code.

At one restaurant close to the Marketplace Shanghai bureau, I’m not allowed to dine in unless I scan a QR code that connects to my telecom company. Once I receive a message indicating I’ve not left Shanghai in the last two weeks, a server squeezes a glob of hand sanitizer onto my hands before seating me at a table.

The Shanghai subway system has a separate QR code on each train, where I scan to input my contact details. Registration is voluntary, for now.

In theory, Chinese people who are not sick and are comfortable handing over a lot of personal information can travel freely around China.

That is not true for all foreigners. Some African residents have complained that they have been forced into quarantine despite testing negative for the coronavirus.

China’s state-run media earlier this month reported that a Nigerian national who tested positive for coronavirus and placed under quarantine had attacked a Chinese nurse. The Chinese health commission began widespread testing of African nationals. The U.S. State Department has advised African Americans against visiting Guangzhou city, where discrimination has been reported.

“During our fight against the coronavirus, the Chinese government has been attaching great important to the life and health of foreign nationals in China. All foreigners are treated equally,” Chinese foreign ministry spokesperson Zhao Lijian said in mid-April. “China and Africa are good friends, partners and brothers. … We will never discriminate our African brothers.”

However, Chinese state-run media has honed in on the fact that new coronavirus cases are mostly imported, even though a lot of those cases include Chinese nationals returning from abroad. Now that the pandemic is becoming worse abroad, foreigners, no matter where they are from, have reported being turned away from restaurants, shops and hotels.

Before I leave Shanghai, I need to answer these questions: Will my destination city allow me in? Will a hotel there accept foreigners? Will I be allowed back into Shanghai without being quarantined?

China has also temporarily shut its borders to outsiders since March 28.

Even with a valid work visa, I will not be allowed back in if I leave the country now.

So, I’m staying put in Shanghai.