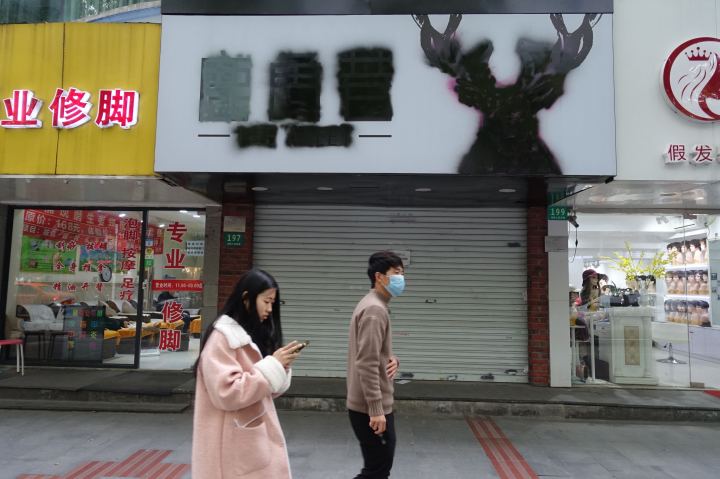 In Shanghai’s southern suburb of Fengxian, cars park along the main shopping streets. Electric bicycles weave past each other. A few dozen shoppers drink bubble tea and browse for shoes and purses.

“Business was not good in January because people went home for the Lunar New Year. Then February, the shops were closed because of the COVID-19 virus,” he said. “Sales revenue in March was only a third of what it was in the past.”

Xie’s is not the only business suffering. China’s economic growth in the first quarter of this year does not look pretty.

The Chinese economy shrank by 6.8% in the first quarter of this year, the first such decline since the country began reporting quarterly economic data in 1992. Economic activity ground to a near halt in China for much of February and March as measures were introduced to contain the COVID-19 virus. Travel restrictions and virus prevention controls are still in effect in some parts of the country.

Small businesses still in the game, like Xie’s, are taking things day by day.

According to the 45-year-old, his business selling women’s casual wear is losing thousands of dollars a month. He didn’t see that coming.

“In early March, when we opened our doors again, business wasn’t good,” Xie said. “I still thought business would return to normal after the pandemic was over.”

He was so confident that he decided to renew the lease at one of his shops, though he did ask the landlord for a discount.

The two sides couldn’t reach an agreement, and Xie did not renew the lease.

“I was lucky that the lease was not renewed,” he said. “By the end of March, I was no longer confident about continuing with the business.”

The lease for one of his five shops will run out within days and the store will close.

A sales announcement now plays on a loud speaker outside the store.

The message says: “Good news! Good news! It’s a clearance sale because the lease on this shop lot is now up. Everything must go! Big discounts! Lowest prices! Get some clothes at rock-bottom prices!”

The pending store closure also means staff member Xiao Lianhong will be laid off, which is worrying for her.

China’s urban jobless rate was 5.9% in March, slightly down from a record high of 6.2% in February. Xiao said she understands the boss had to let her go. Times are tough.

According to a survey in February by top Chinese universities Tsinghua and Peking, 85% of 995 small- and medium-sized firms surveyed don’t have enough cash to last more than three months.

The economic hardship is starting to show up along People’s Road, where one of Xie’s shops is located.

Four storefronts across from his store have been shuttered. Signs reading: “for lease” and “lease transfers” hang outside. Cellphone numbers of real estate agents are scrawled across the doors.

During the coronavirus crisis, Xie has also had some of his old business contacts reaching out to him.

“Every other day, since late March, I’ve received photos of clothing samples from this supplier [I was last in contact with in 2016],” Xie said. “I never respond to him, but he keeps sending me messages.”

Xie’s four other clothing shops are all bleeding money. He said he has already lost more in the first quarter of this year than he made in profits in 2019.

There is government help for small businesses, such as cuts to payroll taxes and utility fees, but Xie said none of the measures helps his bottom line.

Huang can leave her apartment again now that the local Communist neighborhood committee there no longer restricts how often she can go out, and she is shopping regularly at Xie’s store once more.

To keep his other locations open, Xie has put all his clothes on sale in the hope of recovering some of his costs.

He has also asked for all his landlords to drop the rent, without much luck.

“Some of my landlords were nice and told me, ‘I also need to pay my mortgage,’” Xie said. “Others simply said it was impossible [for them to lower the rent.]”

Xie needs to lay off more workers, but he is not finding it easy.

“A couple of my workers offered to split one salary between the two of them so they could both keep working,” he said.

It was an offer he readily accepted.

Xie hopes times will get better.

“There is a Chinese saying that spring will come eventually, but what if my business dies while waiting out the long winter?”