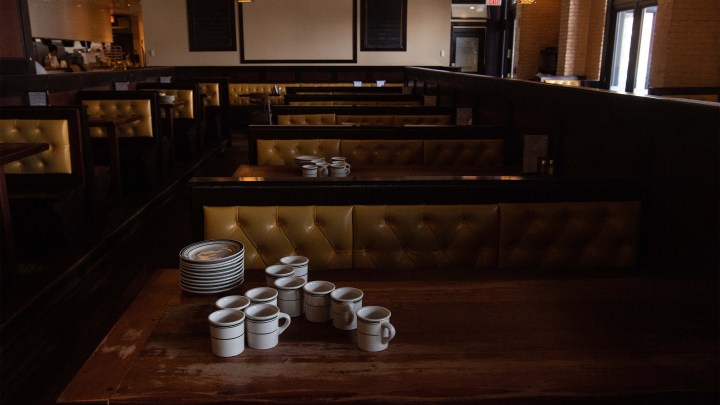 Last week, first-time claims for state unemployment benefits rose by 70,000. That was steep, but it’s nothing compared to what’s coming.

Today, new numbers covering the week that ended Saturday, March 21 show 3,283,000 first-time claims — an increase of 3,001,000 from the previous week’s revised level. That’s the highest level in history, and nearly five times the highest level of claims seen during the Great Recession.

And layoffs and unemployment claims are likely to keep rolling in for weeks, or months, as the nation struggles with the COVID-19 pandemic. The data we’re getting from government agencies might not be capturing the full scope of the damage.

Lisa Tongel is a 49-year-old acupuncturist in Portland, Oregon. She’s been pretty much stuck at home since March 13, when she shut down her practice.

“I don’t have any income coming in at this point because my job is in-person and service-based,” Tongel said. “It’s not just me. My heart is breaking for everyone out there who has had to shutter their businesses.”

Millions of business owners and independent contractors like Tongel don’t have any work right now.

But they’re not likely to show up in the government’s jobless claims report— at least not in the short run, said Heidi Shierholz, who served as the Labor Department’s chief economist in the Obama administration.

“Our unemployment insurance system has huge holes in it,” Shierholz said.

For instance, people who work for themselves typically can’t claim benefits if their work dries up. Meanwhile, she said, the Labor Department’s monthly jobs report often undercounts unemployment when a recession hits. People are only counted as unemployed if they’re looking for work.

“You get laid off, you’re not allowed to look for work unless you’re in essential services because things are totally shut down. And so many people when they are asked by the survey takers, ‘Are you looking for work?’ they will honestly say, ‘No.’ ” (:14)

Economic statistics aren’t likely to capture the full scope of the downturn right now, according to James McCann, senior global economist at Aberdeen Standard Investments. But he said it isn’t hard to see the broad outlines.

“How sudden this decline has been, and how dramatic it’s been, really what we’re seeing through March is an economy go from relative good health to wide-scale contraction,” McCann said.

At this point, it’s anybody’s guess how much further the economy will fall.