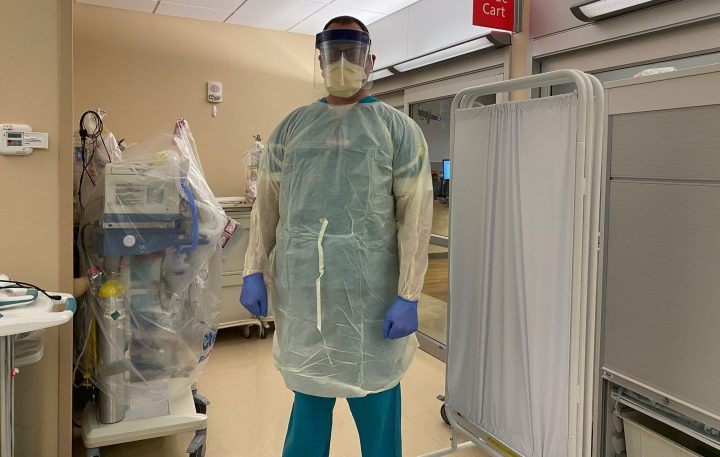 How has your life changed because of the COVID-19 pandemic? Share your story with Marketplace by filling out the form at the bottom of this page.

The first thing Tom Robey thought when he learned that school was cancelled across the entire state of Washington was, “how am I going to get my kids cared for?”

As an emergency room doctor near Seattle, staying home isn’t an option. It’s not an option for his wife, Susan Fink, either, a virologist and immunologist who is working with a team at the University of Washington to try to develop antibody testing for COVID-19 patients.

“Even though the governor said that it’s up to the school districts to provide child care for first responders,” Robey said, that’s not happening. At least not where they are, at least not yet. And, it turns out, it’s hard to find people willing to babysit the kids of an ER doctor these days.

“We had a network of neighborhood babysitters that we had lined up,” Fink said. “But then they cancelled on us.”

Which Robey and Fink understand. Completely. They’re worried, too, about their own family’s exposure, given Robey’s job at the hospital. But it’s hard.

So, in terms of child care, Fink said, “we’re basically taking it one day at a time.”

Earlier this week, when they had a babysitter cancel the night before, Robey called his boss, who’s also an ER doctor, and her 15-year-old daughter came to their rescue. They drove 20 miles to pick her up. That was one day.

Other days, when Robey’s on the nightshift, he’s able to be home with the kids.

And when all else has failed, Fink has stayed home too, but, “we have two little boys, and when they are together all day they fight. So, it’s pretty much impossible for me to get work done while they’re here,” she said. On those days, she’s ended up staying up late into the night to get her work done.

“There’s a lot of stress in the family. We’re trying to use this as a learning opportunity for the boys, about how do you deal with stress and unknowns,” she said. “But kids pick up on how their parents’ emotions are, even if their parents are trying to hide it, so they pick up on our stress. And I think they’re acting out because of that.”

But, Robey said, “it’s not all doomsday.” They’re getting creative, and so are people and organizations around them. Like the YMCA of Snohomish County, the county where he works, which he said, “had emergency childcare up and running immediately,” for doctors and nurses and other essential workers. It took a few days for him to qualify, but he did, and now they have it as backup for the days they really need it.

“I think we’re going to try not to use it unless we absolutely have to,” Fink said. “Because one, I want to make sure that it’s available for other people who need it. Because if we can afford to pay a babysitter, and there’s other people that are also doing essential jobs but don’t have those resources, I’d rather they be able to use the Y. But then also, it’s just like, minimizing contact. Because now you’ve got basically a lot of kids of people with high risk jobs all together. So that seems like a good way to get a lot of parents with essential jobs sick and not working.”

But some days it’ll be their only option. And they’ll take it over no option. With gratitude.

It’s a weird time, though, for all of them. A stressful time.

Their oldest son, the 9-year-old, is talking about being lonely.

Fink is up and down. Some days she feels like she can handle it, other days she doesn’t.

Robey spends a lot of time questioning the meaning of life. And managing his stress by reading papers from China about the coronavirus, combing through them for any tiny detail that might help.

He doesn’t really know what else to do with the stress other than intellectualize it.

“It’s all you can do,” he said. “Because when you’re there in the thick of it, you can’t let any of that show.”

Normally, he’d turn to friends, maybe go out to a restaurant or a bar, spend time with people. But all of that is out now. Even black humor, normally a constant in medicine, especially ER medicine, is kind of failing him.

“This is a tough thing to have black humor about,” he said.

Across the lake from where he lives, two of his colleagues are in the ICU.

His hospital isn’t overwhelmed, not yet. But they’re anticipating, and afraid, that it’s only a matter of time.

Outside, it’s beautiful. The sun is out, the flowers are out.

“The irony is fantastic,” he said. “Spring has sprung in Seattle. And all I see is dark clouds on the horizon.”

How has your life changed because of the COVID-19 pandemic? How are you doing? We want to hear your story. Fill out the form below, and a Marketplace reporter may be in touch.

Check Your Balance ™️COVID-19Parenting in a Pandemic
Share this Story