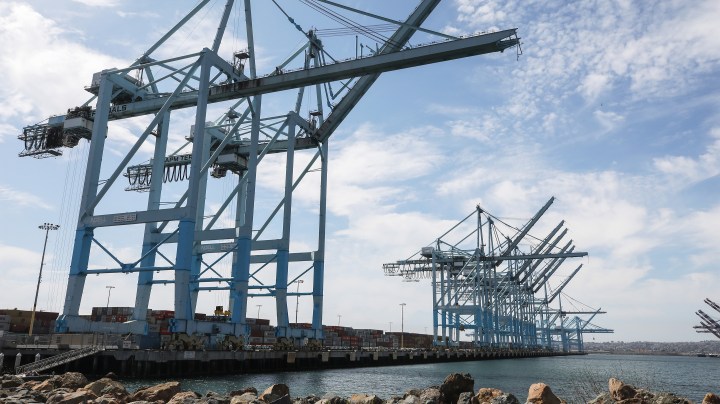 COPY
The affect of COVID-19 on jobs is likely to show up in shipping and transportation. Above, the cranes are idle at the Port of Los Angeles — the nation's busiest container port — on March 6, 2020. Mario Tama/Getty Images
COVID-19

The affect of COVID-19 on jobs is likely to show up in shipping and transportation. Above, the cranes are idle at the Port of Los Angeles — the nation's busiest container port — on March 6, 2020. Mario Tama/Getty Images
Listen Now

Up to the week of Feb. 10 — when the Bureau of Labor Statistics surveyed employers and households to put together the monthly jobs report released Friday — things were still going pretty swimmingly. At least, in the U.S., which hadn’t been hit by a lot of the new coronavirus infections, related economic disruptions and financial market turmoil.

The U.S. has since been hit and states are on high alert. What do we do with today’s good news on jobs that looks backwards, given the uncertainty about the economy — and maybe jobs, too — going forward?

Betsey Stevenson, professor of public policy and economics at the University of Michigan, said this is a snapshot of the job market right before major supply and demand shocks from COVID-19 hit — disrupting trade, travel and financial markets in the U.S.

“What a great report it was, but what does it mean for the future?” Stevenson said. “Nothing, right?”

She said we might not know how much this is impacting businesses and consumers from the next jobs report, either.

“Employment data is a lagging indicator. It’s one of the last things we see. When we see those jobs reports starting to tell us a bad story, we’re in the thick of it. The economy’s already in trouble,” Stevenson said.

Brusuelas said a sharp downturn in some economic activity is already evident.

“I’m calling this the tip of the spear — the shipping and containers data. A number of weeks ago, the volume of shipping began to slow, in some cases double-digits,” he said, adding that’ll likely show up first in weak hiring — or possibly layoffs — in transportation, wholesale and retail trade, manufacturing.

And an early warning sign of that, Brusuelas said, would be a sharp increase in weekly jobless claims. That could indicate that the unemployment rate is about to head higher.

John Leer, economist at Morning Consult, surveys consumers every week. He said people are still feeling secure in their jobs … except when they think about the future.

“[When they’re asked] to project 12 months into the future whether or not they think they are going to doing better or worse financially than they are today, that indicator took a pretty strong drop last week,” Leer said.

It’s stabilized this week, and he said he’s monitoring it closely, because high consumer confidence and robust consumer spending are central to sustaining the economic expansion.