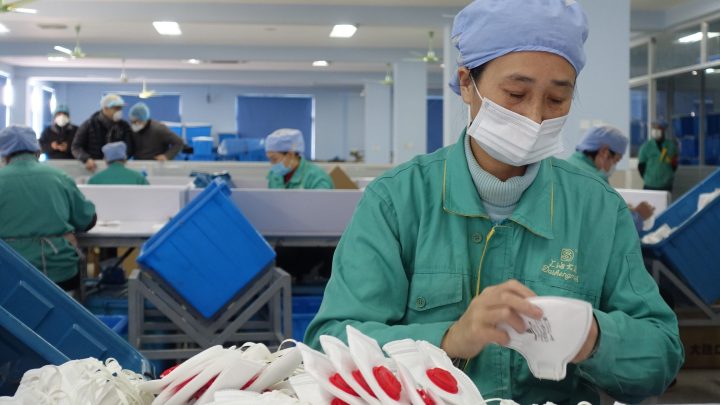 COPY
Face mask manufacturing is one of the essential enterprises called back to work to help contain the new coronavirus. Jennifer Pak/Marketplace
COVID-19

Face mask manufacturing is one of the essential enterprises called back to work to help contain the new coronavirus. Jennifer Pak/Marketplace
Listen Now

At a factory in southwest Shanghai, dozens of machines cut and sew thin white cotton pieces into disposable face masks.

The machines have been running around the clock since Jan. 21, when the factory was due to close for the Lunar New Year holiday.

“That morning I saw reports on the new coronavirus spreading in Wuhan and the rest of Hubei province,” Wu Shengrong, chairman of Shanghai Dasheng Sanitary Products Manufacturing told reporters.

“I discussed with my wife and she agreed with me to turn on the machines and start manufacturing face masks immediately.”

The new virus is related to the severe acute respiratory syndrome (SARS) and Middle East respiratory syndrome (MERS) viruses and currently has no cure. Masks are necessary for nurses and doctors treating coronavirus patients and Chinese authorities have insisted that the general public wear them, too.

Dasheng is one of at least a dozen factories mobilized by the local government to redirect their face masks supplies. It hasn’t been an easy task. When Wu restarted production last month, all 163 of his factory floor workers had returned to their hometowns for the holiday.

“I pulled in all remaining staff in Shanghai to operate the machines, including managers, supervisors, security guards and janitors,” Wu said.

One of them is supervisor Wu Yi (not related to Wu Shengrong). She said she’s working 10 hours a day. By law, she should be compensated three times her daily salary for working the holidays, and paid double for overtime or given time off.

“It’s not something I’m thinking about right now. We’re just focused on rushing the orders out,” she told reporters.

For industries not essential for containing the virus, the return to work was initially nationally delayed until Feb. 3, while certain regions have asked workers to stay away from the offices even longer. And China’s government directives are changing by the day.

However, following a meeting of top political leaders headed by Premier Li Keqiang last week, and with just 72 hours left to go, they encouraged enterprises in a statement to “innovate the way they operate” and “reduce staff flows in workplaces.”

“We can do [our work] online,” he said. “It’s a perfect model for our company.” However, he had foreign clients who were planning to visit China.

“We sent advice to them: Try to postpone as late as possible,” he said.

His business also depends on shoe factories, and it is unclear whether they will be in full production by the end of the week.

There are various travel restrictions across China because of the virus. Some workers are still making their way back to the factories from their hometowns hundreds of miles away.

Much depends on whether the authorities can contain the virus in Wuhan, the epicenter of the outbreak.

Officials have restricted transport into and out of the city, where investor Tian Changxing lives. He said it is harder to find basic items like meat and vegetables.

“There isn’t a lot left to buy at supermarkets, and a number of them have closed,” Tian said.

Further north in Liaoning province, the virus has not spread widely, but schoolteacher Jane Ma said she is still not allowed to go back to work.

“All schools and universities are shut for the safety of the children until further notice,” Ma said. She told Marketplace that she stays home mostly, just to be safe.

In Beijing, Wai Wai, a freelancer in marketing, said she always wears a mask when she’s outdoors, even though the World Health Organization and the CDC say they won’t protect the general public against the virus.

“Almost every news report and WeChat message in China talks about wearing one. You’re almost treated like a criminal if you don’t wear a mask outside,” she said.

Face masks are in short supply. Dasheng’s factory managed to double production within a span of a week from 40,000 a day to 80,000 by the end of January. The company plans to hire more workers and automate production lines.

“You’re almost treated like a criminal if you don’t wear a mask outside.”

Dasheng estimates it could double its capacity to 200,000 face masks a day. That still wouldn’t meet the demand in a city of 24 million residents.

Then there are also the company’s foreign clients, who, until the virus outbreak, accounted for 100% of his business. Most recently, Dasheng’s face masks were sold to places like Australia.

“The bush fires have been burning for a long time and we were supplying Australia with masks but because of this new coronavirus we’ve asked our client to source from elsewhere, because we need to help China, and the company was understanding,” Dasheng boss Wu said.

“I am a Communist party member. Government leaders should be rest assured that I, along with my staff, have the ability to combat the new coronavirus.”