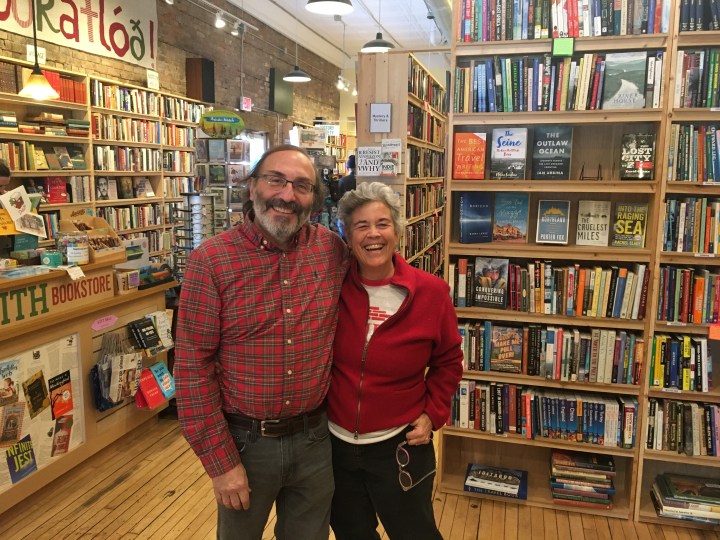 The seeds for Zenith Bookstore, which opened in Duluth, Minnesota, two and a half years ago, were sown on the streets of Manhattan.

“We used to love walking the streets and visiting bookstores, we’re both big readers,” said Bob Dobrow, who with his wife Angel owns the store.

“We were young and in love and full of energy, and we would walk for hours,” recalled Angel. The Dobrows recall casually saying to one another: “Wouldn’t it be fun one day to open a bookstore?”

But the couple got married and had kids. Bob became a math professor at Carleton College in Northfield, Minnesota. When he retired a few years ago and they were packing up boxes and boxes of books, that crazy idea popped in their heads again.

Never mind they had never owned any kind of business before, or that people had been predicting the death of small bookstores since the advent of Barnes & Noble, Amazon and e-books. They moved to Duluth, depleted their savings to remodel an old liquor store, and opened for business to much local fanfare.

Sales have grown about 60% since that first year, Bob Dobrow said. The Dobrows attribute that in part to a loyal customer base that is willing to spend a little more on a book to support a local business.

“One of my great fears was that bookstores would go away, so I feel almost a moral obligation to be in bookstores,” said Chris Johnson, an education professor at the University of Minnesota Duluth who stopped by to pick up some books for his college-age kids.

Since bottoming out in 2009, the number of independent booksellers has grown by about 35% nationwide. There are now more than 1,900 across the country, who together operate more than 2,500 storefronts.

“It’s pretty remarkable in terms of what they’ve been able to do in terms of repositioning themselves,” said Harvard business professor Ryan Raffaelli, who for the past eight years has studied how independent bookstores have managed to be David to Amazon’s Goliath.

He’s boiled it down to a few things. First, there’s the Buy Local movement, which he says indie bookstores helped create.

“Booksellers are deeply embedded in helping to define this notion of why the consumer should shop local,” he said. Then there’s what Raffaelli calls “curation,” the expertise and experience that enables booksellers to compete against the algorithms Amazon uses to recommend books, he said.

And many have made themselves more than just booksellers; many stores are now community gathering places.

That was the idea behind Cream and Amber, one of at least five new bookstores that have opened across the Minnesota this year. Katie Terhune’s shop in Hopkins, just west of the Twin Cities metro, has a cafe and offers six Minnesota craft beers on tap.

“And so we wanted to make a place where good beer and books could come together and people could meet over those two things,” she said.

Still, despite the resilience of independent bookshops, for many it’s an uphill climb.

“I don’t want to be a Pollyanna, because on the one hand, there’s been solid success. But on the other hand, it’s a challenging road ahead of them as well.”

At Zenith Bookstore in Duluth on a recent Saturday, sales were brisk. A local author signed books for customers. But Bob Dobrow remained realistic.

“My wife has this saying, which we repeat a lot, which is, nobody’s getting rich but the bills are getting paid,” he said, laughing.

And he gets a lot of satisfaction out of it. When he turns out the lights at the end of each day, he said, “I get goosebumps just looking at what we’ve created.”