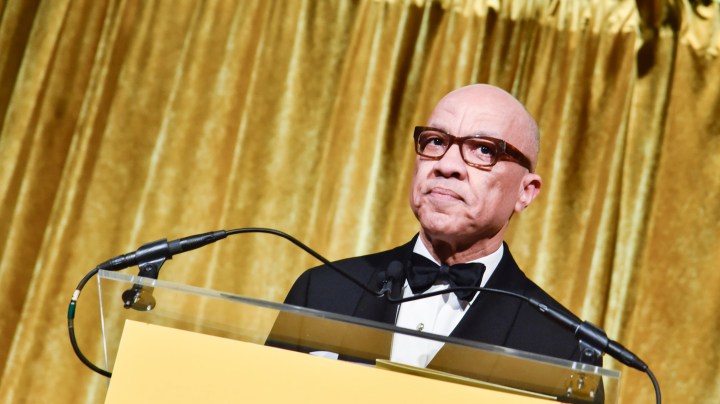 COPY
"We're getting a sort of distorted capitalism that does not produce shared prosperity," said Walker. Kris Connor/Getty Images
How We Give

"We're getting a sort of distorted capitalism that does not produce shared prosperity," said Walker. Kris Connor/Getty Images
Listen Now

Darren Walker heads one of the wealthiest private foundations in the world. As president of the Ford Foundation, Walker is in charge of its $13-billion endowment, allocating $600 million in grants every year.

But the fact that wealth on this scale exists in the first place doesn’t sit easy with him.

“We shouldn’t demonize wealth or demonize success,” says Walker. “But we do have to ask, ‘Is the playing field level?'”

Modern philanthropy, he says, could do a better job at leveling that playing field. How to get there is the subject of Walker’s new book, “From Generosity to Justice: A New Gospel of Wealth.”

Walker sat down with Marketplace’s David Brancaccio to discuss the role of philanthropy in reducing inequality. Below is an edited transcript of their conversation.

Darren Walker: I would say that Andrew Carnegie was a genius. He was a capitalist of remarkable vision and success. And he was, for his time, a radical.

Brancaccio: You wrestle with this throughout the book: this idea that there’s a kind of charity that addresses symptoms, but often misses the cause of the problem.

Walker: What I mean by that is we have to get at the structures and systems which produce so much advantage for some of us and so much disadvantage for others. Whether it’s the system of mass incarceration, our education system, our housing system, our economic systems — they have been designed to produce the outcomes that we’re getting.

So we shouldn’t be surprised that we are the most heavily incarcerated nation in the world per capita. We’ve designed a criminal justice system to deliver that.

It shouldn’t be a surprise to us that we’re getting a sort of distorted capitalism that does not produce shared prosperity.

Brancaccio: A major issue that philanthropic organizations are trying to confront is that, in a sense, philanthropy is undemocratic. It can be a wealthy person deciding how to shape society without asking anybody.

Walker: I do believe that philanthropy can play a role in catalyzing ideas and supporting institutions. Some of those ideas and institutions aren’t always popular. In the 1960s, the Ford Foundation in the American South supported organizations fighting in the courts for the rights of African Americans to go to white schools and have access to public establishments. Had people been given the ballot box, they would have voted integration down.

It’s not that we seek to be undemocratic. It’s that some of the ideas we support are helping us realize the potential of our democracy by making us more inclusive and more participatory.

Brancaccio: Do you think the giving community is starting to understand the significance of inequality in society?

Walker: I think people know that there is something wrong. And even among people who are privileged and live in rarefied worlds, there is a sense that even though we may be better off, it’s not good for our country that so many people are on the precipice — that fewer than 40% of American households have more than $500 in the bank for a rainy day. These are not data that should make us happy.

Unfortunately, I do feel on some occasions as though we privileged people are eating lobster on the Titanic. What I mean by that is that Rome is burning around us. There is far too much pain being felt by far too many American households.

Brancaccio: There are some people who don’t even accept that income inequality is a problem that needs to be solved. They just see it as a sign that wealthy people have succeeded.

Walker: It is a sign that wealthy people have succeeded, and we shouldn’t demonize wealth or demonize success. But we do have to ask, “Is the playing field level?”

Brancaccio: Are you saying that donors need to get over themselves — maybe they need to listen a little more?

Walker: I think one of the side effects of privilege and wealth is that you begin to believe that you provide the solution to things around [in] which you have no expertise, or lived experience or real knowledge.

Brancaccio: Sometimes people want to just deal with what’s in front of them. Should people do both, or should we really focus on the systems and not the individuals?

Walker: I think we have to do both. They’re not oppositional ideas. In fact, they’re interdependent.

We need to demonstrate that by intervening and assisting people, individuals, that we can have success, that we can then replicate into larger, scalable solutions.

So I believe we must invest in that individual homeless person who we need to help get off the street and get into shelter.

And then we have to ask ourselves, “Why is there so much homelessness? What are the root causes?” Only through a systemic, structural response can we hope to get at reducing the numbers at scale.

How We GiveShelf Life
Tags in this Story
Share this Story