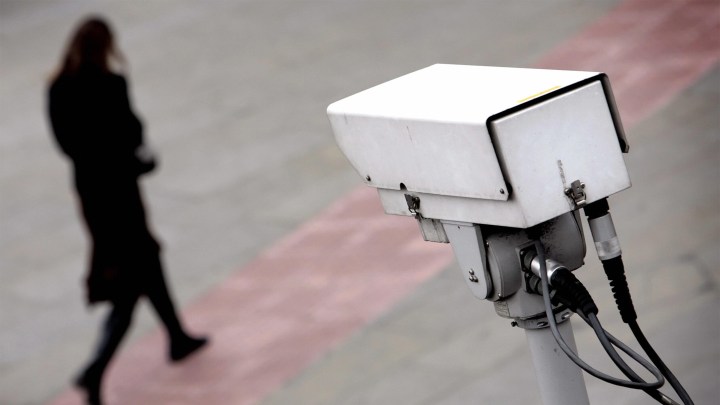 “Those companies have been able to stockpile and in the short term they haven’t had a problem,” Paul Triolo, Washington-based geo-technology analyst at the Eurasia Group consultancy, said.

“Those companies have been able to stockpile and … haven’t had a problem.”

“They are surviving,” said Dan Wang, tech analyst at Gavekal Dragonomics in Beijing, said. “Their share price, the ones that are publicly traded, have barely taken a dip.”

The algorithm spit out a whopping 100 geometric measures of my facial features, a description that required some 700 words and figures. So, yes, my picture was worth almost a thousand words.

“It creates a mathematical model, a face print,” said Dahlia Peterson, research analyst at Georgetown University’s Center for Security and Emerging Technology, “a unique one that can only pertain to you.”

In China, face prints of suspects and wrongdoers are stored in public security databases, and individuals are monitored in real time in case there’s a match, as this state-sponsored video segment shows.

“Basically, police can track you across a city, just based on your face,” Charles Rollet, reporter for the video surveillance industry website IPVM said. Rollet monitors public contracts between Chinese authorities and security industry companies for work in Xinjiang province, and to him one involving security camera maker Hikvision stands out.

By some estimates, one million Uighurs have been detained and placed in involuntary camps across Xinjiang. Chinese authorities collect vast amounts of information on individuals in the province: height, travel patterns, use of encrypted phone apps, automobile color, abnormal electricity use and of course biometric data, according to Human Rights Watch.

“You go into the police station, you have images taken of your face from various angles, various facial expressions,” Peterson said. “You have to give your blood, you have to give voice samples, and these are all sequestered away.”

“Western companies or investors cannot claim denial,” Peterson said. “They really must take a hard look at what they are doing.”

Contacted by “Marketplace,” an Intel spokesperson stated that it “opposes any abuse of human rights and has a policy to not ship any products unless we have high confidence that our products are not being used in connection with human rights abuses.” Intel added: “We do not always know nor can we control what products our customers create or the applications end-users may develop.”

A spokesperson for Seagate stated: “Seagate continuously monitors and complies with policies and regulations across the world. we are aware of the action by the U.S. Department of Commerce to add multiple Chinese entities to the Entity List effective October 9, 2019. We continue to review this situation and will fully comply with these rules and regulations.”

An Nvidia representative said the company could not respond by publication time. Western Digital did not respond to Marketplace’s request.

Despite the blacklisting, the targeted Chinese companies have stockpiled U.S. components in advance and, when possible, found alternative suppliers from Asia and Europe, Wang of Gavekal Dragonomics said. U.S. sanctions law also allows them to buy many Silicon Valley components manufactured outside the United States.

“We have determined that we are able to ship some foreign-produced SoC [System-on-Chip] products to the listed entities in compliance with applicable law,” chipmaker Ambarella, which supplies Chinese security camera firms Hikvision and Dahua, stated in a securities filing in November. “The company does not expect the Entity List Rule to have a significant impact.”

At the blacklisted Chinese voice recognition firm iFlytek, the chairman and CEO reportedly told employees in an internal memo that the ban will not have a significant impact.

They may be longer-term risks to these Chinese firms, however. Facial recognition startup Megvii, also on the entity list, delayed its initial public offering at the Hong Kong Stock Exchange this month. News reports suggest the exchange asked Megvii for additional information on the U.S. government entity listing.

In addition to Megvii, another another facial recognition firm on the U.S. blacklist, SenseTime, has been rumored to be considering an IPO as well. The entity listing may hurt the companies’ reputations with potential international investors and customers, Triolo said.

“This is sort of a red mark hanging over the companies … most of them are global or had global aspirations.”

“This is sort of a red mark hanging over the companies,” Triolo said. “Most of them are global or had global aspirations. Also their ability to keep staff — I understand that a lot of the companies maybe are losing key software engineers.”

Megvii objected to the blacklisting notice in October, arguing that its products are designed for commercial uses. “We require our clients not to weaponize our technology,” Megvii said in a statement. “No revenue was generated from Xinjiang in the six months ended June 30, 2019.” SenseTime said it was “deeply disappointed” in the listing.

For the United States, there is also a risk: that sanctions could backfire in the long term. Even though American semiconductors are considered far superior to Chinese competitors, the targeting of Chinese firms has turbo-charged the mainland’s investment in developing its own domestic industry. Already, Chinese tech giant Huawei has produced artificial intelligence chips that could eventually be substitutes for American products.

“It’s not that far-fetched to speculate that Huawei could replace those vendors,” Will Townsend, senior analyst at Moor Insights & Strategy, said.