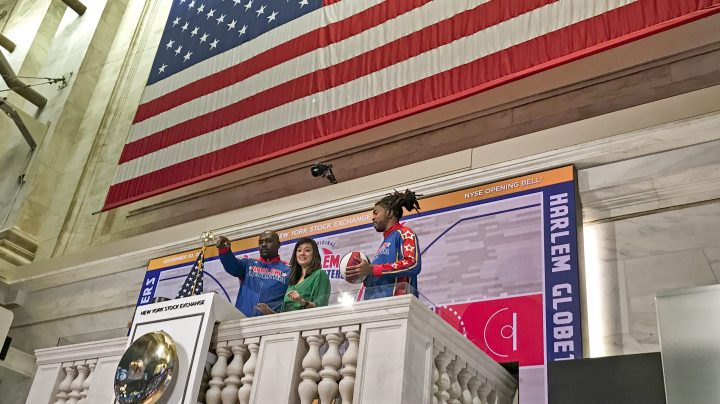 At the New York Stock Exchange trading floor, just before 9:30 a.m. on a Wednesday, three players from the Harlem Globetrotters stood on a white balcony overlooking a crowd of visitors, media and NYSE members. They were there to ring the NYSE’s opening bell and promote an international tour. The players threw basketballs back and forth with onlookers as the official start of the trading day drew closer.

When the clock struck 9:30, Harlem Globetrotter Big Easy Lofton pressed a button, triggering the brass bell affixed to the balcony. Lofton held the button down for 10 seconds as onlookers cheered and the trading day officially began. With his other hand, Lofton spun a ball on his index finger.

Over the last few decades, ringing the opening and closing bells at the New York Stock Exchange has become a daily ritual on Wall Street. Both events are ceremonial, and the bells are rung for different durations: the opening bell sounds for 10 seconds, and the closing bell rings for 15.

“They tell you that if you don’t hold the button down for 15 seconds, then the members are going to boo you, that you didn’t do it correctly,” said Jim Sheehan, the CFO of Hormel Foods.

He rang the NYSE’s closing bell in October, after the NYSE invited the company in during its 2019 investor day. Hormel’s CEO surprised Sheehan with the job right before it happened.

“I’ve been with the company for 41 years, so I’ve had a long career with the company,” Sheehan said. “It’s one of those things that is almost the culmination of a career for me.”

Ever since 1903, the exchange has used brass bells to bookend the trading day, replacing a Chinese gong. Exchange officials would ring the bell every day, but in 1995, the NYSE started inviting companies to do the honors.

He said it was the early days of the dot-com boom, and TV news was covering more of what was happening on Wall Street. And with business channels like CNBC broadcasting live from the NYSE trading floor, Gordon said the opening and closing bell ceremonies gave the NYSE more publicity, too.

People end up on the marble balcony for all sorts of reasons. Executives ring the bell when their companies go public, or if they’re releasing a new product. Celebrities and dignitaries ring the bell.

“It almost feels like when you give away the key to the city,” said Ian Bremmer, founder of the consulting firm Eurasia group. “It’s this honorific in a place [where] a lot of things seem ephemeral.”

Bremmer rang the bell twice: in 2009, and again in 2018 after he started a new media company, G-Zero Media. Both times, Bremmer said the exchange invited him.

“It was like, ‘yeah, why don’t you come when you have a chance,’” Bremmer said. “It wasn’t something we were lobbying for.”

The NYSE didn’t divulge how the selection process works. However, its website offers a request form, which says the bell is reserved for companies listed on the exchange, as well “deserving nonprofit organizations” when last-minute opportunities arise.

“We were on our way to present our work at a fundraiser and got this call at 6:30 the evening before the bell was supposed to be rung,” said Becca Di Meo, executive director of the nonprofit City Growers, which teaches young people about farming.

Apparently, another company that was scheduled to ring the bell had dropped out, and City Growers’ chair asked Di Meo if she could step in. Di Meo had thirty minutes to throw together a list of people who would be there. She brought along a few colleagues.

“I was really excited about it because I learned about ringing the bell in school,” said City Growers program manager Renel Saint Jour, who City Growers selected to press the button. He beamed as the button rang, pumping his fist in the air.