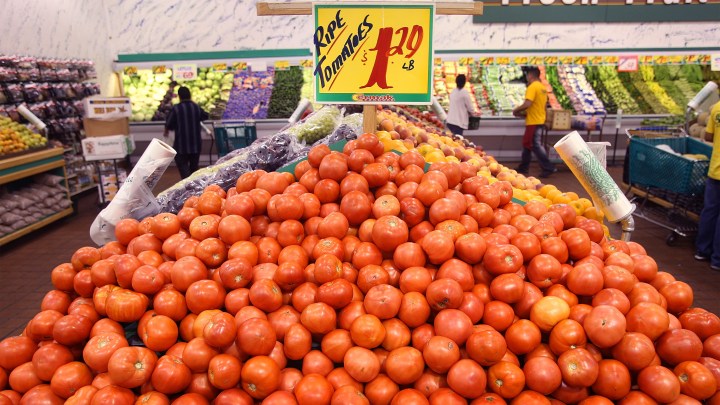 COPY
The flavor of tomatoes is hard to track, unlike disease. Scott Olson/Getty Images

The flavor of tomatoes is hard to track, unlike disease. Scott Olson/Getty Images
Listen Now

If you’ve been unimpressed with some grocery store-bought tomatoes, there’s probably a reason for that.

“After World War II, breeders really intensively focused on improving varieties, increasing yield, getting disease resistance. Flavor has been neglected and it’s deteriorated dramatically,” in the words of Harry Klee, professor of horticultural sciences at the University of Florida.

The specific genes responsible for flavor were not known, and even if they were, without modern affordable genome sequencing technology it was difficult and expensive to test whether they were being passed down.

“If you’re ignoring certain traits, there’s a potential you can lose those traits,” said David Wolff, a breeder at Sakata Seeds.

One by one, over generations of tomatoes, flavor-related genes slipped out of the DNA of a lot of tomato varieties as other qualities — pest resistance, disease resistance, shippability, shelf life, thicker skins — were bred in.

Jim Giovannoni, scientist with the USDA’s Agricultural Research Service scientist and professor at the Boyce Thompson Institute, examined the broader genome of tomatoes, spanning wild types to any number of varieties, and was able to locate one gene known as Tomlox C that influences aroma and flavor in tomato.

“This particular variant is absent in most modern tomato varieties, although it’s very prevalent in the wild progenitors,” Giovannoni said. “So if we go back and look at the wild origins of tomato, we find this gene pretty common, but in the domesticated tomato, it was largely lost early on.”

Over the past few decades, an effort to recover tomatoes’ lost essence has intensified. A proliferation of different types of tomatoes in grocery stores has intensified competition for consumer dinner plates. Cheaper genome sequencing technology has made the arduous quest more feasible. And public research dollars have stepped in where private investment dared not tread for fear of risk of lost return on investment.

Even so, the actual task of identifying lost flavor genes and bringing them back has been tough.

Charles M. Rick, a celebrated scientist at the University of California, scoured the globe for long-lost varieties and distant cousins of tomato plants, collecting genetic material. Jim Giovannoni and his colleagues at the Boyce Thompson Institute scanned the broader tomato genome for genes that could be useful for flavor. Harry Klee at the University of Florida ran taste tests to narrow down the field of flavor related genes, eventually identifying them and developing genetic markers to track them.

And then came the task of actually putting the genes back.

“The challenge,” said Klee, “has been to move the flavor back into the modern varieties without destroying and all of the hard earned gains that the breeders have made over that last 60 or 70 years.”

Researchers and breeders, once they identify a plant with great flavor, must cross it with modern commercial varieties and hope that the flavor genes are passed down without losing the genes responsible for pest resistance, size, yield and shelf life.

In his greenhouse in Gainesville, Klee pointed to an experimental hybrid, a 6-foot tall lush green bush and an “exhibit A” of the challenge at hand. One parent was a sprawling wild tomato with fruit the size of berries, with intense flavor. The other was a commercial variety known for large fruit and abundant yield.

“Hugely improved flavor. But the yield is probably about 90% of what that commercial variety is,” said Klee. “Commercial growers don’t want it.”

Nobody wants to reduce their yield by 10%. In other instances, superior flavor has come at the cost of disease resistance.

“You know you can have flavor, but if you can’t produce a crop because of pest and disease, what good is it?” asked Tony DiMare, vice president of the DiMare Co., which has been growing tomatoes for three generations.

But, increasingly, researchers are cracking the code. Klee has grown thousands hybrids and experimental crosses, and said after 20 years of publicly funded research he’s about zeroed in on that perfect combo of flavor, disease resistance and yield.

Harry Klee, professor of horticultural sciences at the University of Florida.

Armed with the knowledge of which genes are responsible for flavor, and markers to track them, breeders like David Wolff at Sakata Seeds are corralling flavor related genes into their own varieties of commercial tomatoes.

“We’re in an exciting time because I think hopefully in the next year or two, we’ll be able to see the introduction of varieties that people can say hey this has better flavor,” said Wolff.

If you ask Tony DiMare about flavor, he cautions anyone from pinning all their dreams of better flavor on genetics. The way a tomato is handled on the way to your dinner plate can ruin even a genetic super-tomato, he said, especially if it’s been refrigerated.

“If you’ve ever had a mealy, mushy tomato, that typically is an indication the tomato’s been kept at too cold a temperature for a prolonged period of time. Cold is the worst enemy of the quality of a tomato,” DiMare said, explaining that tomatoes kept below 58 degrees Fahrenheit lose texture and flavor.

Flavor-enhanced tomato varieties can sometimes be found if you look hard enough. Klee recommends both the Campari tomato and a variety known as the Garden Gem that he helped develop. Another is the Tasti-Lee, also developed by breeders.

Whether more flavorful tomatoes currently being developed end up widely available in the grocery store will be determined by whether they are grown at all, said Hutton. This comes down to price and marketing.

“You have to have the growers that will grow it, and all those things have to come together at the same time. And that’s really challenging,” he said.

Between 50% and 60% of DiMare’s customers are restaurant chains that put tomato slices in sandwiches or burgers, where the flavor is masked. Demand for more flavorful tomatoes will have to come from consumers, filtered through grocery stores and packing companies, feeding all the way back to the grower.

The price of improved flavor will also play a pivotal role. If new flavorful varieties are substantially more expensive, growers are willing to pay more for seed.

“If it’s a measurable benefit we get back, DiMare said. “You can’t, you know, spend X amount more for the seed and not get any benefit back.”

But if improved flavor doesn’t cost substantially more, and simply becomes the norm among seed producers, it could in turn simply become the norm for most commercially grown tomatoes, and seep into the grocery store over time.

These are economic questions to be answered by marketing, demand, and complex relationships between consumers, suppliers, middle men, growers, and seed suppliers. The science of more flavorful tomatoes is just about here. The economics of them is TBD.