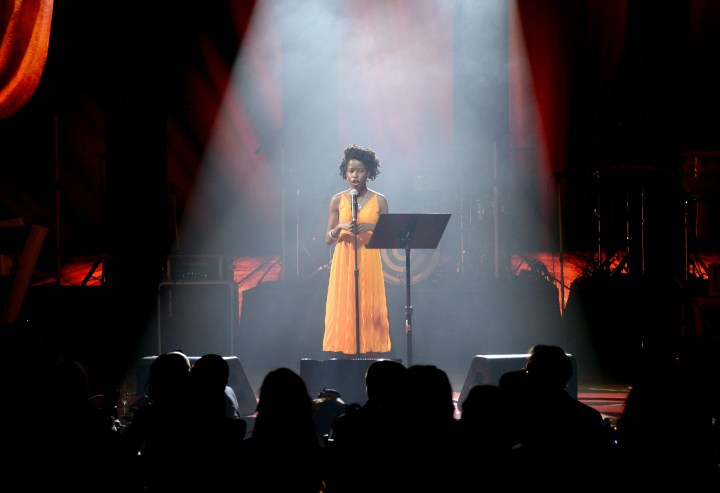 Poet Amanda Gorman says she writes "about hope, so that I can directly challenge that stereotype that black women are just wedded to fury.” Above, she performs at the AltaMed "Power Up! We Are the Future" gala in Beverly Hills in 2016. Michael Kovac/Getty Images for AltaMed
Make Me Smart Question

Poet Amanda Gorman says she writes "about hope, so that I can directly challenge that stereotype that black women are just wedded to fury.” Above, she performs at the AltaMed "Power Up! We Are the Future" gala in Beverly Hills in 2016. Michael Kovac/Getty Images for AltaMed

This week, National Youth Poet Laureate Amanda Gorman looks to an unlikely source to understand how to employ tech for social justice.

Photography was a new technology in the 19th century. And Douglass used it to further the abolitionist cause. He sat for over 160 photographs during his lifetime, and in each photo, he made sure that it captured a counter-image to the black American stereotypes at the time.

“So for example, if you look at his photographs, he’s never smiling. It was because Frederick Douglass was very intentional with rejecting the idea of the happy, jolly, merry slave. And how I internalize that in my own poetry … how can I be intentional with the imagery that my language is creating, and how can I use that to counteract stereotypes? In my own life, as a black woman in my own life, I’ve found people often place me in the archetype of the angry black woman, which is why I so purposefully write poems that are instead about hope, so that I can directly challenge that stereotype that black women are just wedded to fury.”

Gorman will be starting her senior year at Harvard University this fall. You can listen to her answer in the episode below.

Make Me Smart Question
Tags in this Story
Share this Story