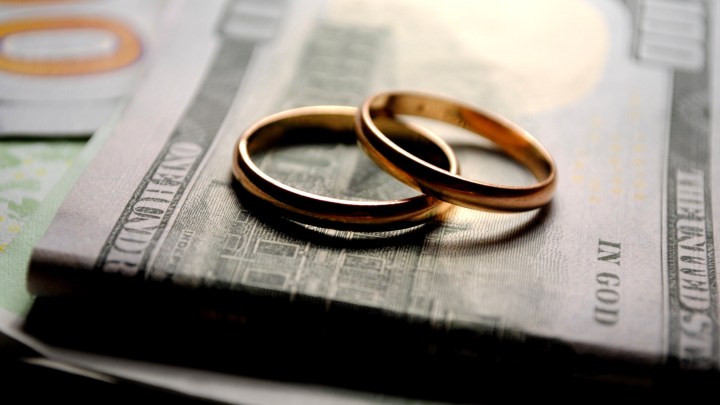 A few months before they were set to get married, Talaat McNeely came clean to his fiancee, Tai. He was in debt — a lot deeper than he’d let on.

In all of their pre-wedding conversations about money, he’d found a way to brush off or explain away the red flags on his credit report, when really, it was as bad as it seemed.

They worked through it, and did end up getting married. Now, more than a decade later, they run a business together, His and Her Money, where they advise other couples on how to approach money in marriage. Something they tell people all the time, Tai said, is one of the things that ultimately made her decide to marry Talaat: You are not your money.

Being fully honest and transparent with each other and, once they got married, combining all of their accounts, has worked really well for them, they say. It’s also the primary advice they give to other couples: fully combining finances when you get married is the way to go.

That is the approach the majority of couples today take. Over 70% of married couples do combine their income completely, according to Kasey Eickmeyer, a postdoctoral researcher at Rutgers University who studies how families pool income. Her research, like most that’s out there, only surveyed straight couples.

But there are some indications that may be changing.

Joanna Pepin, a researcher at the University of Texas at Austin who studies gender inequality and what couples do with their money, found that most people these days — regardless of age or gender — say they think some kind of middle ground is best.

“The majority of people thought that couples, whether married or not, should take that hybrid approach of sharing some money and keeping some money separate,” she said.

That’s what Steph Miller and her husband Seth do. They’re in their 30s and have been married for about four years.

When they first moved in together, before they got married, they kept their separate accounts and split things like rent, utilities and dinners out. He was making a lot more than she was at the time, so instead of just going 50/50, they calculated what each one should pay by percentages, “so that we both were feeling the same amount of that expense,” Miller said. “It was important to us, prior to marriage, to split based on percentage so things would feel equal to us.”

These days they put most of their money into a joint account, which they use to pay for all the things they do together. But they still keep separate checking accounts, where they each get a chunk of money every month — roughly 2% to 4% of their combined income — that they can spend as they please. “Even though we’re married to each other, and have that partnership, we also are still two different human beings who have our own things that we want to accomplish in life,” Miller said.

William, 27, and his fiancée, 28, who did not want to share her name for privacy reasons, have a similar strategy. They aren’t married yet, but they’re about to be, and they’ve already been together for more than a decade, since high school.

When it comes to the big picture, they are on the same page about finances and what they want in life. But there are differences, too. William is very frugal with his money, while his fiancée “likes the little things in life,” he said.

“I realized I was starting to get very stressed, looking at all these little purchases come up. And I would bring it up to her, and she would get stressed.” In order to eliminate that stress, they each now get $400 a month they can spend as they wish, no questions asked.

They’ve also had to navigate some cultural differences when it comes to money. He’s Korean, she’s white, and “finances in Korean culture is very familial,” William said. “It’s communal. The money that I have or my parents have, I feel like we’re in it together as a family. Whereas in American culture, that might be more individualistic.”

That became apparent when they started to tackle debt and savings as a couple. “I felt perfectly comfortable tackling her debt, or adding onto her retirement savings account because … I saw it as our account,” he said. But when they were tackling his debt or his retirement account, “she wasn’t really comfortable with that.” So they’ve had to experiment and talk and grow emotionally, he said, “make sure we’re on the same page.”

Virginia Lacy Hilliard, 43, and her husband Nick Hilliard, 38, also had to do some experimenting when they first got together. They fall into that majority of married couples bucket, where they share every last penny.

“There’s some transactions that I make that he is laughing about, and asking me: ‘How many beauty products?’ or ‘How many different bottles of organic shampoo, or whatever it may be, can one have?’” she said with a laugh. “On the other hand, him grabbing sandwiches to go and dining out, especially during the week, is something else where I’ve been like, ‘Hey, can you see how much this is adding up to?’”

It’s a balance they’re still trying to figure out. But for the most part, Lacy Hilliard said she feels like sharing everything, and tracking it closely with budget software, is working well for them.

“We try to rise above as much as possible when we are thinking about where some of the small dollar items are going. And just asking ourselves, does this truly … make me happy, over the long term and in the short term? And then we kind of trust each other from there.”

Trust, and positive perceptions of how the other partner is doing financially, play a huge role in whether couples decide to merge finances, said Eickmeyer, who studies how families pool income.

“So if you think that your partner has a good job, or if you like the way they handle their money, or you think that they’re financially responsible, you report a higher likelihood of pooling your income with that partner.”

Even more than that, though, are what she calls “relationship-specific characteristics.” Like whether people have children together, or from a previous marriage, or whether either partner has been previously married and divorced. Couples who have children together are most likely to report pooling all their income, followed by couples with both shared and stepchildren, Eickmeyer found. Couples where one partner has children from a previous relationship are the least likely to pool all their money.

Chérie Garcia-Kuper, 39, and her husband Josh Kuper, 41, fall into that last category. They got married last year — it’s his first marriage, her second — and they’ve decided to keep almost all of their money separate.

After being a stay-at-home mom the first time around, Garcia-Kuper now has her own small business, doing kitchen and bath design, and feels like she’s on sound footing financially, all on her own. Kuper, an Air Force veteran, also has some good money saved from time he spent in Afghanistan as a contractor.

“He has that nest egg, and that’s absolutely not my right to have it, to touch it, because he worked for that,” she said. “In the same sense, my business and the stuff that I have worked hard for. So it just makes things so much easier. And then it gives me the peace of mind.”

Things like utilities and groceries and dinners out, they split. With their house, which they bought together, he covered more of the down payment while she’s paying for a remodel. Stuff for her kids, like ballet lessons or car insurance or tuition, she pays herself. She doesn’t see that as Kuper’s responsibility.

There have been points of contention, but “for right now, this is working really well,” Garcia-Kuper said. She likes being able to spend what she wants on concert tickets and not have him question it, and not having to see how much he’s spent on outdoor gear at REI.

There are a lot of practical reasons for people to keep all or some of their money separate, said Pepin, the University of Texas researcher.

“What I found was that there’s really no norms, that everything today is negotiated,” she said. “Couples are trying to take the influence of money out of their relationships. So if pooling money means money is not associated with power, they do that, and if it means keeping some money separately, they do that.”

There are also signs that younger couples may be somewhat more inclined to keep all or some of their money separate.

In one study Eickmeyer did, with the National Center for Family and Marriage Research at Bowling Green State University, she found no significant difference between how married couples in different age groups — millennials vs. boomers — share finances. When she looked both at married and unmarried, cohabitating couples as one group, though, she did find notable differences; couples under 35 are much less likely to combine all of their income than those over 55.

A 2018 Bank of America survey, which also looked both at married and unmarried cohabitating partners, found something similar: just 11% of Gen Xers and 13% of baby boomers kept their finances separate, while 28% of millennials did.

Adam Jacobs, 29, and his wife, Emily Jacobs, 30, are those millennials. They lived together for a couple of years before getting married in 2018, and got used to just splitting everything down the middle. Since their wedding, they are “continuing the trend of what we had been doing before we got married,” he said. They use banking apps to transfer money to each other for big things, like rent. “Then for smaller expenses, like meals, groceries, utilities, we end up using Venmo a lot.”

So far, it’s just seemed convenient to keep things separate. “In terms of desire to put it together in a joint account, I don’t know if there necessarily seems like there’s any benefit to doing that,” he said. “Or at least none that we can we can come up with.”

Kasey Eickmeyer has found, though, that “those who report fully income pooling tend to report higher quality relationships, and higher levels of trust toward their partner.” Especially among younger adults.

Based on the work they do with couples of all ages, Tai and Talaat McNeely say they personally believe that when married couples pool their finances it leads to higher levels of trust.

Steph Miller has found that to be true for her. She and her husband, Seth, sit down every Sunday, for a half hour, max, to talk about their finances — what they’ve spent, what’s coming up, short-term goals, things they want to learn more about. They each also leave the meeting with a little personal finance homework assignment for the coming week.

“I think as we’ve been talking about our finances more regularly, and really looking at it as a tool for us to do the things in life that we want to … we’ve both been able to make managing finances a very positive experience,” she said. “Money is not really a stress for us in our marriage anymore.”

How have you handled finances with a significant other? Let us know using the form below.