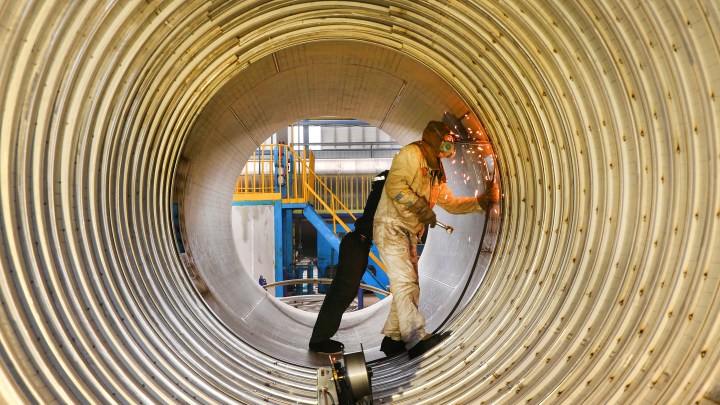 COPY
A worker welds a liquefied natural gas tank at a factory in Nantong in China's eastern Jiangsu province on March 14. STR/AFP/Getty Images

President Donald Trump is scheduled to visit a new liquefied natural gas facility in Louisiana Tuesday, where he’s expected to applaud the industry for adding jobs and boosting energy exports. The event comes after China said it would raise its tariff on U.S. LNG from 10% to 25%.

The U.S. has been exporting less LNG to China since Beijing tacked on tariffs to the product last fall. Nikos Safos with the Center for Strategic and International Studies said that hasn’t hurt the industry much, because it has plenty of global customers.

“More or less everyone has signed up to buy LNG from the United States, except for the Chinese,” he said.

Total U.S. LNG sales jumped 61% in 2018 compared to the previous year. Ken Medlock at Rice University said a 25% LNG tariff sounds bad, but U.S. exporters have ways of getting around tariffs.

“Maybe you’ll see U.S. LNG cargo land in Japan, or South Korea, and then a cargo that was originally destined for one of those locations landing in China,” he said.

The U.S. might not need to sell directly to China right now, but one day it might, said Steve Gabriel at the University of Maryland.

“You know, everything China does is an order of magnitude bigger than a lot of places. They sort of drive the market,” he said.