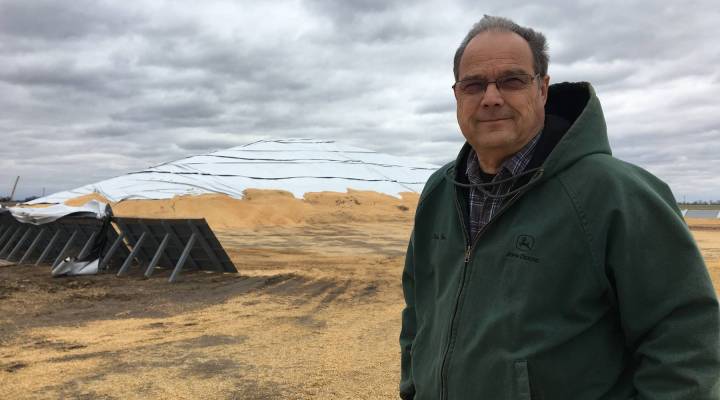 COPY
Farmer Tom Giessel stands in front of a corn pile near Larned, Kansas. The corn was grown in 2017 and because of a market glut, it still hasn’t sold. Peggy Lowe/KCUR

Farmer Tom Giessel stands in front of a corn pile near Larned, Kansas. The corn was grown in 2017 and because of a market glut, it still hasn’t sold. Peggy Lowe/KCUR
Listen Now

A mile north of the small town of Larned, Kansas, sit two mountains of grain — one corn, one wheat — which have been stored there since the fall of 2017.

There’s no market for the grain, so the local farmers’ co-op can’t sell it and there’s nowhere else to store it. The wheat pile alone, surrounded by concrete barriers and covered with white tarps, holds 660,000 bushels.

“The elevators are full. The terminals are full. And we’ve got grain on the ground,” said Tom Giessel, whose family has farmed here for generations. “So what’s the prospective price?”

Low prices are part of the problem for farmers, along with brutal weather, now compounded by flooding in some areas, and ongoing trade wars that have had a devastating effect on exports. The latest indication that times are tough in farm country: the Farm Service Agency reports that more than a fifth of its direct loans – 21.08 percent — were delinquent in January, up from just 12.4 in September 2011.

“The farmer is definitely feeling the squeeze and the bankers that we survey are reporting that squeeze,” said Ernie Goss, an economist at Creighton University who conducts the monthly Rural Mainstreet Index, a survey of bank CEOs in rural areas in a ten-state region of the Midwest and West.

Many farmers, like Giessel, are tired of years of losing money. “It’s just amazing how much wheat that I personally raised and ended up not really making hardly any money doing it,” Giessel said. “Not because I was a bad operator. It’s because the price is low.”

Some grain prices have fallen roughly 50 percent in the last five years. The USDA’s chief economist said recently that soybean exports to China are down 90 percent thanks to the ongoing trade dispute.

Bankers are reacting to the loan delinquencies by raising collateral requirements, restructuring loans, or just rejecting the loans outright, Goss said. Still, he doesn’t expect a situation like the farm crisis of the 1980s. “What I expect to see is not so many foreclosures and bankruptcies,” Goss said. “What I think we’re going to see is larger farmers buying up smaller farms.”

That’s been going on for decades. The latest numbers from the U.S. Agriculture Department show that the average farm is about 444 acres – back in 1935, it was 155.

In central Kansas, there are fields of winter wheat just starting to come up. The wheat’s planted in the fall and right now, tiny green bristles are bursting out of the dirt. Spring planting of corn and soybeans starts in about a month.

“The Catch-22 that farmers are in, they have to raise a lot of volume, or they think they have to raise a lot of volume, because the price is low,” Giessel said. He’s 66 and is thinking about retiring – he got by last year by selling some land he inherited, he said. Lots of people are thinking about what he calls “quietly exiting.” So far, there are two farm auctions scheduled for this spring in Pawnee County. “I’m just really surprised,” Giessel said, “there aren’t a lot more.”

Correction (March 28, 2019): Previous versions of this web and audio story misstated the name of the Farm Service Agency. They have been corrected.