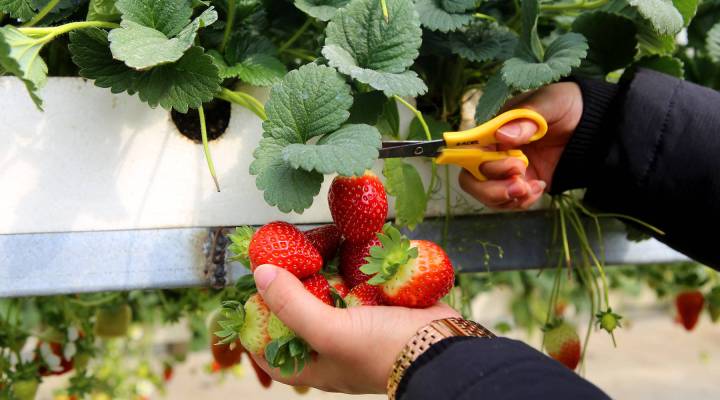 As clouds gather, Bertha Magaña keeps her eye on a small farm crew moving along a row of strawberry plants. With rain coming, this is the last strawberry harvest of the season.

Magaña grew up in a family of farm laborers. She was a sharecropper and later worked in plant nurseries. Now, at 58, she’s an independent farm owner on California’s central coast. But she’s still considered a beginner because she’s run her farm for under 10 years.

Beginning farmers like Magaña operate about a quarter of the more than 2 million farms in the U.S. today, according to the most recent survey by the USDA.

She is part of an emergent generation of small farmers in California who have horticulture skills, but little or no business background. They are turning to an increasing number of nonprofit programs designed to boost new farmers’ success.

Magaña gets business mentoring from David Mancera, who’s on staff with a California nonprofit called the Kitchen Table Advisors, which works with small organic farmers and ranchers who are trying to scale-up their businesses.

When Mancera drops by Magaña’s farm and asks how the harvest is going, she tells him it’s a better yield than the 2017 season, when she and her family had some difficulties. In 2017 Magaña said her husband — and farming partner— had open heart surgery. The health crisis prevented her from being able to harvest. She needed a bank loan to get through the rough patch.

Mancera said that at the time, he had been working on a cash flow spreadsheet with Magaña.  It let the bank see that the farmer was tracking money in and money out and that she had a plan.

“We don’t tell them what to do. We guide them, we help them ask questions,” said Mancera, who worked in real estate and finance before becoming a Kitchen Table Advisor. “Ultimately, they’re the business owners. We’re trying to help them develop this business mindset.”

There’s really no blueprint for becoming a small-scale farmer in California.

Farmer Kristyn Leach drives a tractor along a small plot of land she farms in the town of Winters, west of Sacramento. That’s about 150 miles north of Magaña’s farm.

Leach, a Korean adoptee, got interested in traditional Korean farming as a way to connect with her heritage.

“When I started my farm,” Leach said, “it wasn’t because I felt like a competent business person or had any even basic financial literacy as an individual.”

In the beginning, Leach worked for other farmers and she also had a restaurant job. Back then, growing veggies was just a “side hustle.” But since 2012 Leach, 36, has made a living growing heirloom Korean and East Asian beans, herbs and melons for an upscale San Francisco restaurant.

“So, it’s sort of been like ‘accidental business owner,’” Leach said.

That’s the case a for a lot of beginners, according to Evan Wiig of the Community Alliance with Family Farmers. The nonprofit advocacy group runs training and networking for rookie farmers.

“We see farmers, over and over again, coming with a passion, interest and knowledge in crop production, working with soil health management. Usually, that’s what draws new people to agriculture” Wiig said. But the next generation of small-scale farmers is not particularly attracted by the prospect of sitting behind a computer, filling out spreadsheets on crop loss analysis — which is also part of the job, Wiig said.

In California, land close to markets like San Francisco is expensive and hard to come by. When small farms fail, “it almost always comes down to some element of business planning,” Wiig said.

Leach also gets guidance from Paige Phinney, another Kitchen Table Advisor. She says the connection has helped her scale up her business and expand seed production.

“For a lot of farmers, that’s such a huge boost, to just not feel alone in it [and] have people advocating for you and [providing] resources of one kind or another,” Leach said.

As a result of getting business mentoring from KTA, Leach says she’s no longer running her farm paycheck to paycheck. But, she also says she’s still stubborn enough to farm her own way.