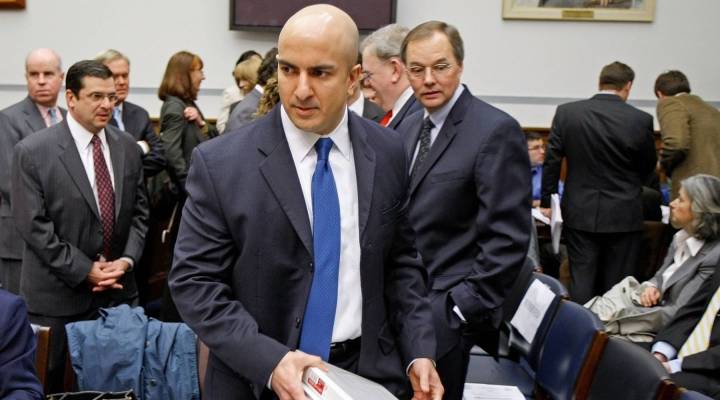 COPY
Neel Kashkari, then the acting interim assistant secretary for financial stabilization at the Treasury Department, arrives for a hearing on Capitol Hill back in 2009. Chip Somodevilla/Getty Images

Neel Kashkari, then the acting interim assistant secretary for financial stabilization at the Treasury Department, arrives for a hearing on Capitol Hill back in 2009. Chip Somodevilla/Getty Images
Listen Now

The Federal Reserve needs to slow down its interest rate hikes, which could put the economy at risk of a recession, according to Neel Kashkari, the president of the Minneapolis Fed and the man who ran the bailout program during the last financial crisis.

“My view is we should be patient. We should pause the rate increases, let the economy continue to strengthen,” Kashkari said. “And if inflation picks up, we can always raise rates then.”

New surveys show that CEOs and CFOs are worried a recession could happen as soon as next year.

The Fed has raised interest rates for the fourth time this year, pushing the short-term interest rate by a quarter point from 2.25 percent to 2.5 percent. Fueled by a strong economy, Fed Chair Jerome Powell has plans to hike interest rates two more times in 2019.

But Powell said, “We know that the economy may not be as kind to our forecasts next year as it was this year.”

Kashkari joined Marketplace’s Kai Ryssdal to discuss why he thinks the Fed is raising rates and the risks associated with those rate hikes. Here are some highlights from our interview with him:

Kai Ryssdal: Yes, the labor market is strong, but housing is slowing a little bit. You can go back and forth on this until the cows come home. But the fact is that it does appear to be slowing a bit, and yet the Fed keeps raising. People want to know why.

Neel Kashkari: Well, I think that’s right. There are some signs of slowing — housing and autos which are very sensitive to interest rates. When interest rates go up, mortgage payments go up and so that slows the economy down, so we are paying attention to that. But I think overall, the balance is, well, the economy still seems like it has a lot of momentum. And my colleagues and I want to get back to a neutral monetary policy stance. So, look, there’s no crystal ball. We’re not exactly sure. But we’re trying to move cautiously as we’ve taken the data.

Ryssdal: Does it make you crazy that your words get parsed like this?

Kashkari: Well, I have a lot of sympathy for Chairman Powell because it’s not easy to deliver a message exactly as you want and have the markets interpret it exactly as you’ve intended. So I think he’s doing a very good job. But it’s a tough job that he’s in.

Ryssdal: What happens if the Fed screws it up? Because inflation, as you know, can come on super fast.

Kashkari: Well, if inflation comes on super fast and we have to raise rates really quickly to keep it in check, that could really slam the brakes on the economy and that could put the economy in a recession. So that’s one risk. Another risk is if we raise rates too soon, and the economy doesn’t need the higher interest rates, we could put the economy into recession ourselves unnecessarily. And so I wish it was an exact science, it’s not entirely clear. But I’m in the camp of, “Let’s be patient, let’s let the economy continue to strengthen — and then let’s raise rates when we know we need to.” I don’t want to end the expansion prematurely if there’s no inflation actually building.