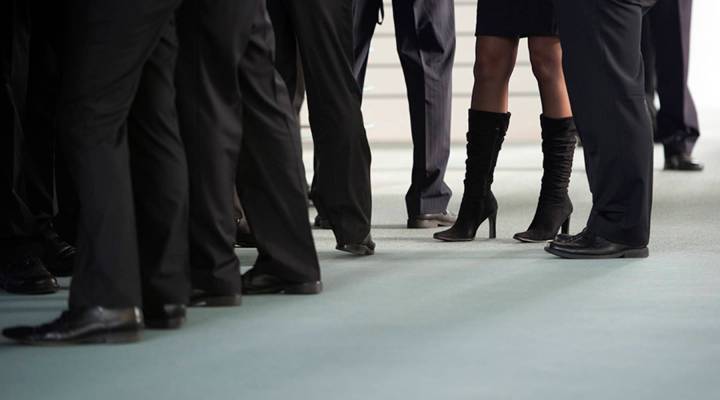 From the Playboy centerfold used to test photo-sharing technology to afternoon work meetings held at strip clubs, Silicon Valley has never been a place that welcomed women, says Emily Chang, host of Bloomberg Technology and author of “Brotopia: Breaking Up the Boys’ Club of Silicon Valley.” Chang details how the technology industry became so unfriendly to women, the daily harassment some female engineers face at work and how tech could fix the problem. What follows is an edited transcript of her conversation with host Kai Ryssdal.

Kai Ryssdal: I need you, I guess, to start at the beginning here. Tell me the story of Lena Söderberg.

Emily Chang: It’s a fascinating story, and it goes all the way back to 1973 and a group of engineers who were looking for a photo to test their algorithm. And it just so happened that there was a Playboy magazine lying around because no one thought it odd to bring that into the workplace. And they happened to choose the one that was in the centerfold, and this photo has become the most popular photo used in image algorithm processing to this day, from the teams working on the Apple iPhone to Google Images. And, you know, for a lot of male engineers, the fact that it was originally a naked woman is sort of an amusing historical footnote. But for women it has been very alienating.

Ryssdal: There are details in this book which I cannot say on a public radio program, that would make people blush or, honestly, get angry. And I encourage folks to read it because it’s mind boggling, but I guess my question is, were you surprised by the depth of the misogyny and straight-out sexism? And, you know, there’s racism as well and all kinds of different things but to the point of this book, the boys’ club of Silicon Valley, did it surprise you?

Chang: It did surprise me how long bad behavior has been not just tolerated but normalized. I mean, Susan Fowler, an engineer at Uber, her first day on the job she gets propositioned for sex by her manager —

Chang: Absolutely. And perhaps the most shocking part about it is not that she was propositioned but that she brought it to HR, and they said, “We’re going to let this one slide because he’s a high performer.” And the reality is a lot of bad behavior has become the norm, and it’s completely hostile for women.

Ryssdal: Give me a sense of what it’s like for your average, you know, 32-year-old female computer engineer at your average Silicon Valley not-gazillion-dollar tech company but some tech company trying to make a go of it?

Chang: So No. 1, they’re completely outnumbered. I mean, women make up 20 percent of prime technical roles, so engineers that you’re talking about. And in some companies, bad behavior is just the norm. So I spoke to many engineers at Uber who said, “Yeah, in the middle of the day we’d be invited to strip clubs and bondage clubs and to drink at 3 in the afternoon.” Uber had kegs open in the middle of the office. And if they left at 3 and didn’t come back until 3 a.m., that was OK as long as they got their work done.

Ryssdal: How much of a break does Silicon Valley get for the bad behavior becoming the norm because they invent all these cool things and they change people’s lives, oftentimes for the better, but sometimes, you know, not so much?

Chang: Right. They get quite a break because they can say, “Look what we’ve created. we made Facebook, we made Google, we made Apple.” But that’s exactly the reason that they shouldn’t get a break. You’ve got some of the smartest and richest people in the world here. They’ve changed the world and they can change this, too. Women make up a quarter of computing jobs. They’re only getting 18 percent of computer science degrees. No other major has that kind of disparity. The top banks on Wall Street are close to fifty-fifty when it comes to gender parity. Silicon Valley needs to do better and it can.

Ryssdal: Well, yeah, it probably can, but do you think it wants to?

Chang: I think there certainly needs to be the will, and it just baffled me how this really progressive industry could have such grave inequality. If you talk to people, for example I interviewed Twitter co-founder Ev Williams, and he told me that he thinks if there were more women on the team early on that online harassment and trolling wouldn’t be the problem it is today. They were thinking about cheerful and amazing things that could be done with Twitter. They weren’t thinking, “Oh, how can my product be used to send death threats.” We need women involved in making these products because they’re shaping our future.