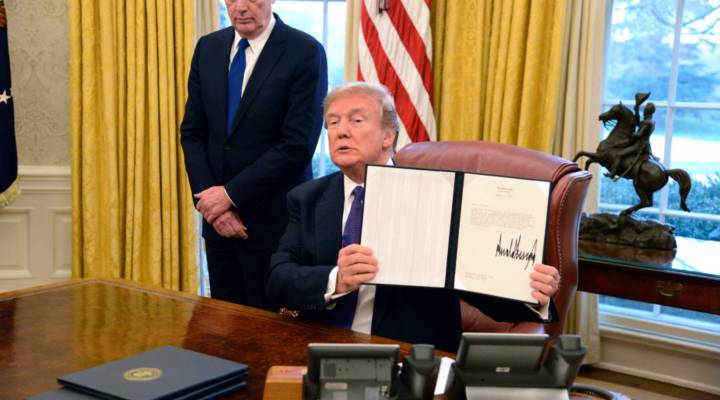 Mike Huckleberry is a former restaurant owner turned Democratic politician who, in 2008, watched Electrolux close a plant in his town of Greenville, Michigan. It spurred him to enter politics, and he served in Michigan’s statehouse from 2009 to 2010. The story of Greenville is a story this country knows all too well: manufacturing jobs moving overseas from a town that once relied on that kind of work.

On Monday, the Trump administration announced its intentions to raise tariffs on imported solar panels and washing machines. Marketplace Morning Report host David Brancaccio called up Mike Huckleberry, now the owner of a small business that does credit card processing, to check in on what he thought of the move. Though industry experts argue the solar tariffs, in particular, could end up hurting more workers than they help, manufacturing areas like Greenville see it differently. The following is an edited transcript of their conversation.

Brancaccio: You’re famous for many years, you had this restaurant in the town of Greenville, Michigan, and I remember the place mats, you had a political message on your place mats, remember that?

Huckleberry: I do. We were protesting against Electrolux, which was closing down and sending over 3,000 jobs to Mexico to make our refrigerators. And I started having people sign the back of [the place mats] saying that they were disappointed in our congressmen for supporting this type of trade agreements, to allow this to happen. And that kind of led me into a political world, that we made our political statement with it.

Brancaccio: I found out about your place mats about 14 years ago in 2004. But when you read back the place mats, the relevance remains. It read, I have one here, “Dear politicians, in spite of continued raises and perks for yourselves, you have allowed NAFTA, an unfair world trade policies, to take its toll on hardworking Americans, their families, and the communities they live in, as well as our great community. In spite of it, we have news for you, Greenville is bigger than Electrolux.” That was the Swedish-owned refrigerator factory that was at the time you and I talked in danger of moving to Mexico. And people came together to try to save the factory, didn’t they?

Huckleberry: They worked real heard, and our governor, Jennifer Granholm, helped the state make incredible offers and packages [for them] to stay. And nothing was going to beat the $1.50 an hour that Mexico is going to pay. They’re in Juarez, Mexico, right now.

Brancaccio: To bring us up to 2018 here, what do you make of these headlines that the Trump administration is going to hit some overseas appliances with a tariff because the competition has just become too fierce and hurt American jobs?

Huckleberry: Speaking very frankly, it might be one of the few things that I could support President Trump on. Somebody’s got to stand up to these countries that do this. They blocked us from shipping our goods back. I hope it works out. I hope it doesn’t start a retaliatory trade war, but somewhere somebody has to say, “Hey, we’ve had enough.”

Brancaccio: When Donald Trump was elected, I thought of you, I thought of your town, Greenville, Michigan. Many people don’t see the benefit of these global trade agreements. They see the negative effects, and a politician like the current president of the United States articulates that.

Huckleberry: I agree with you. What makes it really interesting is if you look at all the polls for these unfair trade agreements, it’s been his party that has promoted this and calling it free trade. And now his party seems to be trying to have a switch on it. Maybe they’re coming to the party too late, but at least, maybe they’re coming to the party.

Brancaccio: And this from a Democrat who [served in] the Michigan statehouse as a Democrat. So they closed the Electrolux factory, sadly, back then. They closed the building?

Huckleberry: They did, and most of it has been tore down. At one time, David, it was the largest refrigeration plant in the world, at one time they made 5,000 refrigerators a day. And I might add to this conversation we attracted a company called United Solar who had a unique solar product, and they were manufacturing it here in Greenville and shipped it more often to Europe because Europe has better programs for renewable energy. They were put out of business by [China’s] solar [industry] undercutting them, and this new discussion with President Trump is it’s washing machines and solar. That gives me one more reason to support that.

Brancaccio: So it’s not just the appliances that have an extra edge, when you discuss it in Greenville, Michigan. It’s also the solar issue.

Huckleberry: That’s absolutely right. United Solar had a very unique product. They built two big, beautiful buildings in our community and our industrial park. They were attracting jobs, they offered good packages for their employees and were shipping [their product], again, all over mostly Europe. China has been undercutting in solar for years. And what China attempt is, according to what we read, is to put these people out of business so that they own the solar market.