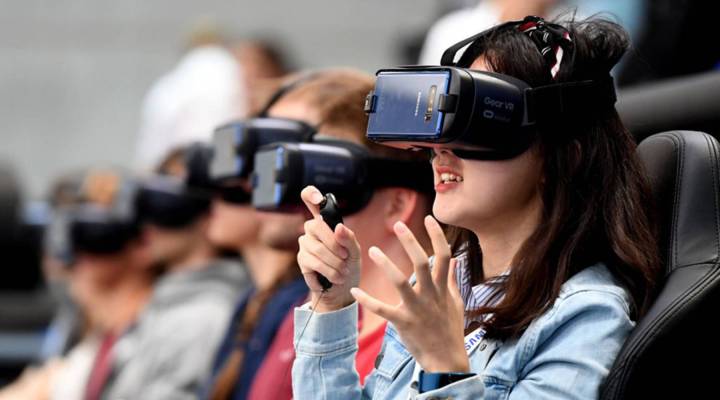 COPY
Visitors try out VR glasses at the booth of Samsung at the IFA Consumer Electronics Fair in Berlin on September 2, 2017. MAURIZIO GAMBARINI/AFP/Getty Images

Visitors try out VR glasses at the booth of Samsung at the IFA Consumer Electronics Fair in Berlin on September 2, 2017. MAURIZIO GAMBARINI/AFP/Getty Images
Listen Now

With the stipulation that there are always new fads in the technology world, one of the most enduring tech trends is virtual reality. Facebook, Google, everybody who’s anybody in Silicon Valley is developing something in VR.

But virtual reality is an idea that has been around much longer than you might know. VPL Research was a pioneering VR company started in 1984. It helped bring us the Nintendo Power Glove, and developed virtual reality for uses in surgery, car prototyping and motion capture in movies. Jaron Lanier founded VPL Research, and his new book on the past and future of virtual reality is called, “The Dawn of Everything: Encounters with Reality and Virtual Reality.“ Marketplace host Kai Ryssdal spoke to him about where he thinks VR is headed. The following is an edited transcript of their conversation.

Kai Ryssdal: You have been around this world for a very long time and I want you to take me back to I guess 1984, when your first company got started and you really kind of dug in, and remind people what the entire idea of virtual reality was like back then.

Ryssdal: And now here we are 30 some years later and you still have to strap something to your head, it’s still not entirely REAL real. Did you think we would be farther along?

Lanier: Well not really. I had predicted that there would be consumer virtual reality of a preliminary sort by 2020. And so it’s maybe a little ahead of schedule but it’s approximately where I thought it’d be.

Ryssdal: But when you put, I mean let’s just pick a name brand, when you put the Oculus Rift on your head, are you pleased with how things look? Both literally inside the headset and as an industry?

Ryssdal: OK, so why aren’t we doing that stuff? Is it just too technologically hard?

Lanier: You know it’s probably true that the haptic side, the touch and feel side, of virtual reality is more technically challenging than the visual side, but I think there’s also just this visual dominance problem. People, especially I think the kinds of people who become digital engineers, are pretty visually dominant and tend to give the eyes the pride of place.

Ryssdal: It’s interesting you talk about engineers in that way because you are not technically a trained engineer, right? You’re a guy who’s been in this for a long time and sort of learned from the ground up.

Lanier: My training was in math and I kind of picked up my engineering on the streets it’s true.

Lanier: Well you know sometimes you have to so that’s that’s the way it works, yeah.

Ryssdal: Virtual reality is not, you say, a consistent thing, right? it has fits and starts; it goes forward and then it stops. Is there a chance do you think that we could actually see some real tangible progress like we have seen with laptops and mobile devices and stuff?

Lanier: I’m actually really confident in terms of the basic hardware. I’m a little less confident about the cultural aspects of it. Right now the way we sell these experiences is as downloads that somebody might just experience in a dark room. It kind of bothers me, it should be more of a service where people connect together in fantastical ways. But I think we’ll get there.

Ryssdal: But you do have that problem, right? Even if people are connecting inside the virtual world, let’s say in an office and you’re having a meeting or whatever, you’re still sitting around with a headset on your face and somebody else is walking by on the way the coffee machine going, “what?”

Lanier: I know. A lot of people think, “wow that’s a weird thing to put this giant bizarre object on your head.” But to me it’s what makes reality ethical because when you have this big thing on your head the illusion is announced. That means it’s a magic show instead of a charlatan taking advantage of you. The point is that you know this is an illusion. So I hope they never get small and convenient. I think they should be ugly and a little awkward.

Ryssdal: The key word with virtual reality then being virtual, right? Because it’s just not real.

Lanier: No it’s a form of communication. It’s real in the sense that what we express through it can be real but it’s a thing to enjoy within reality it’s not an alternate or a substitute reality.