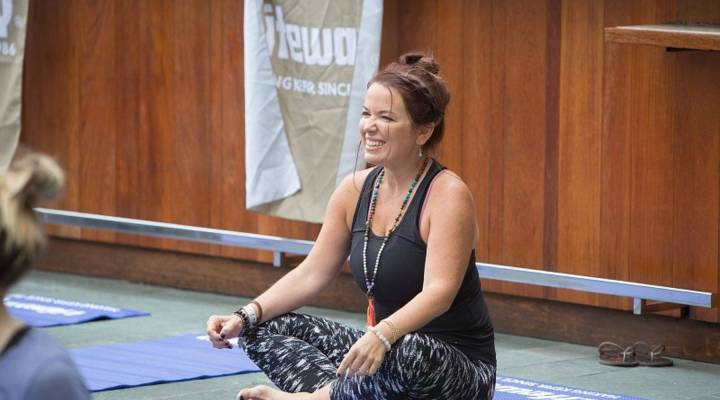 CEO Julie Smolyansky doesn’t just want her company Lifeway Foods to sell kefir — she wants it to serve as an example on major social issues.

Smolyansky has been an outspoken champion for survivors of sexual assault. She has a charity that helps pay police departments to test rape kits that have been sitting around on police department shelves, and she served as an executive producer on the documentary “The Hunting Ground,” which addressed sexual assault on college campuses.

Note: “The Hunting Ground” was distributed by the Weinstein Co., which recently ousted founder Harvey Weinstein amid allegations of sexual harassment and rape.

We spoke with Smolyansky about the Weinstein case, gender inequality in the workforce and how she thinks companies should care about more than profits. Below is an edited transcript of the conversation.

David Brancaccio: Now movie tycoon Harvey Weinstein — what is the road forward to change the culture?

Julie Smolyansky: Well, ironically, Harvey also was the one who bought “The Hunting Ground,” the film that I was one of the executive producers on.

David Brancaccio: About rape on campus.

Smolyansky: Yes, the film highlighted the cover-up of rape on college campuses. And so right now we are asking for any money that he’s made off of this film to be donated to rape crisis centers and organizations like our own. We started Test400k, which aims to end the backlog of untested rape kits. We can’t, as leaders in the health and wellness space, it can’t only be about BMI and diabetes and obesity rates. We really need to look deeper into the health of our culture, of our communities, of our workforce in general, and the community at large.

Brancaccio: But given Harvey Weinstein and cases that may stretch back for decades before they become public, what has to change in the workplace to stop this stuff from happening?

Smolyansky: Well, for one, we need more gender parity across every industry, whether it’s in the private sector, in the corporate world, in government and media. There is a lack of women in positions of power — real power — and in positions of leadership. Less than 4 percent of CEOs are Fortune 500 and Fortune 1000 CEOs. Less than 20 percent of government is women. You know, there’s been 1,900 congresspeople and only 50 women.

Brancaccio: I can’t resist just sticking on a moment of history here in the company. Your dad and his team take the company public; it trades on the Nasdaq; he passes away. And there’s a suggestion that you might take over the company at age 27. Not everybody in your family thought that was the right choice at the time.

Smolyansky: The day that my dad passed away, his best friend said to me there is no way a 27-year-old girl can run this company. That’s it. Sell your stock. The company’s done. That really fueled me, and it got me really angry, as these kinds of comments have gotten me angry my entire life. I’m fortunate that my father put strong women in my view all the time — from Christie Hefner, who took over Hugh Hefner’s Playboy business, to my own mother, who was a successful businesswoman in her own right. Because I think if you can’t see it, you can’t be it.

Brancaccio: At Lifeway Foods, your core product, kefir, is, as you see it, part of a healthy lifestyle. There are companies that talk a good game on health in the workplace and having a sustainable impact. But sometimes it’s marketing and not much more. How do you make sure that the work that you do at Lifeway is for real?

Smolyansky: We look at the needs of our workforce, and what we see right now is the millennials driving a change in how we do things and how many companies are doing things. For example, to accommodate the needs of millennials, we now have space at the WeWork location downtown here in Chicago because millennials want to be kind of in an urban location; they don’t want to drive into the suburbs. So we’re very conscious of that. I think many companies are sort of grappling with the same idea, but to get this diversified pool of talent, we need to meet them where they are, and they’re demanding for different things. They also want to have more flexibility — that’s super, super important. They want to be held accountable for their work — not necessarily for the hours of which they’re in an “office.” Some of those meetings are nontraditional; they tend to be offline or even by conference. The technology that is being all created is really helping drive some of this and is driving gender in the workforce. The technology and that flexibility is good for everyone. We won’t reach parity until both men and women have parity and both understand why there needs to be this flexibility. And we need to let the men go off early to get to soccer practice as much as we let the women off.

Brancaccio: And the organization has to acknowledge that you’re saying.

Smolyansky: Absolutely. I mean, I obviously do. You know, one of the things that I do is use social media as one of my platforms to communicate with not only my workforce, but everybody in my community. And I think having that empathetic, compassionate leader talk about these issues makes it a lot easier for others to talk about it and make changes as they need.

Brancaccio: Now I have to ask you: Your brother is COO?

Brancaccio: Any tips for working professionally with close family members?

Smolyansky: God, I’d love to get some. If anyone has any, send them over. This is a really, really tough thing to do. Family business is not easy. We struggle all the time, every day. Eventually we get to the right place. But it is rough and it’s rough for, I think, the entire Lifeway staff sometimes. But what I will say is that it does create a culture of family — that what we do know at the end of the day is even if we fight and argue, we are family and we will eventually always come together, and we do bond through the experience. The culture that we have at Lifeway is one of family, and it’s one thing that I think millennials really want to see. They want to feel that they’re part of something bigger than just themselves or that they’re just a number. They want to feel part of a community. They want to feel a sense of family. They want to feel connected to others. They want to feel that their company serves a greater purpose than just profits and that their company is leading on some of these social issues, especially right now when there is sort of this sense of lack of leadership, and people are looking to others around in their community as a sense of where to go next. What are we going to do with everything that’s happening in our world? And so I think that’s one thing that Lifeway has been ahead of for many years. We’ve always been talking about issues around immigration or refugee life. My family and I were refugees ourselves from the Soviet Union, and we were immigrants. We were out there talking about these issues all the time, and so that’s what I would say. Millennials today want culture and community more than they want a paycheck. They want to be a part of something bigger. They want purpose. They want meaning in their lives. They want the companies that they buy products from to have meaning and purpose. They are voting with their dollars every day.