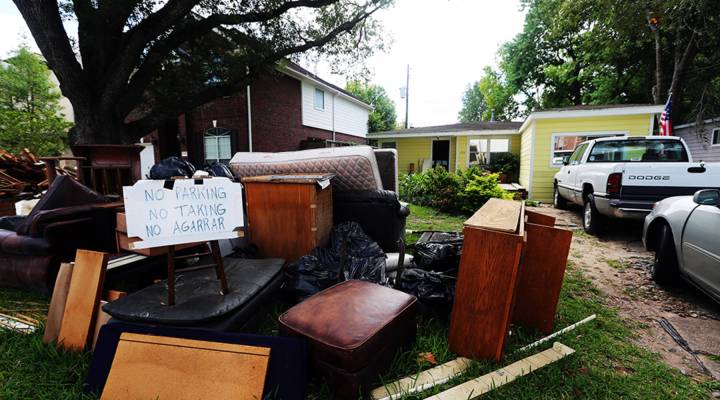 COPY
Jean Olson's home in Bellaire is one of many on her street that is inside-out. Even family heirlooms are in her front yard because her house is still uninhabitable. Filipa Rodrigues/ for Marketplace
Weather Economy

Jean Olson's home in Bellaire is one of many on her street that is inside-out. Even family heirlooms are in her front yard because her house is still uninhabitable. Filipa Rodrigues/ for Marketplace
Listen Now

Officials in Harris County, Texas  — the greater Houston area — have asked for $17 million from the Federal Emergency Management Agency to buy more than 100 homes determined to be “hopelessly at risk” for future flooding. This comes a little more than a month after Hurricane Harvey. County officials want the money quickly because they’re trying to offer buyouts as soon as possible, avoiding the years-long timeline for the process after other floods.

Woodland Trails West is a neighborhood in northwest Houston that sits right along White Oak Bayou, a sleepy, slow waterway that became a rushing river after Harvey.

Standing on the porch of his family’s 1960s ranch house, Benjamin Singer said the neighborhood looked a lot different 20 years ago. It’s seen repeated flooding since he grew up here in the 1980s, and many homeowners have left.

“If you looked over there, that whole flat has been cleared,” he said, pointing across the water, where other families have taken buyouts, “There’s no houses but maybe 20 in that whole neighborhood.” Woodland Trails West is now a haphazard landscape: clusters of homes in-between vacant lots.

Singer’s home stayed dry in Harvey, but it has flooded twice in 15 years. The Singers considered a buyout when they flooded last year and got a letter from the county.

“We decided to put in an application to see what FEMA would give us,” he said. “And if it was something that would be worth our while we’d obviously take it. But, we declined.” He won’t say how much the family was offered, but said they didn’t find the amount worth the price of upending their lives. They could have appealed to try for a better offer, but they would have had to hire their own appraiser.

After Harvey, Harris County plans to push more aggressively to get homeowners like the Singers to move. Harris County Judge Ed Emmett wants to fast-track the process.  “What you don’t want is a rebuild, spending all the money to rebuild a home and then a few months later we come in and say, ‘Oh, by the way, we want to buy it and tear it down,’” he said.

Indicating a map of the county that takes up an entire wall in his office, Emmett pointed out different neighborhoods officials have been targeting for years. “Bellaire, West University, Meyerland, Braes Heights  along Braes Bayou…” They’ve all repeatedly flooded, he said.

Emmett said the county needs $650 million to buy out 3,600 homes in perpetual flood danger, county-wide. Usually that money comes from FEMA and takes years to get — in rounds of negotiations between locals and feds.

Alex Greer, a political scientist at Oklahoma State University, studies homeowner buyouts after a disaster. He said the process starts from scratch each time. “What we’d expect to see is that some of the general characteristics of buyouts would stay the same and we’d iterate over time and make them better,” he said. But he added “you don’t see that.” He is calling for nationwide reform to establish some best practices.

Yet, forcing people to move is often inherently emotional and messy.

Jean Olson was leaning against her car, outside her little home in a flooded area called Bellaire. All her belongings are in a pile in the front yard. “I just did not expect the water to get as high as it did,” she said. “I was 29 inches in my house. And I’m 20 inches off the ground on pier-and-beam. So that’s four feet of water.”

She had separated out family heirlooms but doesn’t have anywhere to take them. So she’s posted signs in the front yard: no parking, no taking.

“That dog won’t hunt,” says Jean Olson when talking about taking a buyout for her home in the Bellaire area of greater Houston. Her house took 29 inches of rain after Harvey.

Since Olson bought her single-story home in 1993, huge million-dollar houses have sprung up on all sides. Many of those neighbors are living on their second floors, while the ground level gets repaired. Olson said some cooked for her just after the storm and even let her stay with them a night or two.

Olson’s house flooded twice in the past twenty years, but she’s not at all interested in a buyout. “There’s really no other place in Houston I want to live,” she said. “I love my neighbors, I love my neighborhood. You know, it’s home.”

“That dog won’t hunt” she said about a buyout as she waited for dump trucks to clear the debris from her yard.

Greer said he’s seen situations where even the most stubborn homeowners get pressured into taking buyouts. “Officials would tell them, ‘you’re welcome to stay here, but we may not bring back in power lines or you may have to worry about vermin and crime and all those things,’ so it doesn’t feel like an option,” he explained.

There is a path for Houston to force buyouts, but it would require the county to use strictly local funds — no federal money — and exercise eminent domain, seizing private land for public use. But politicians, at every level, want to avoid going down that road.