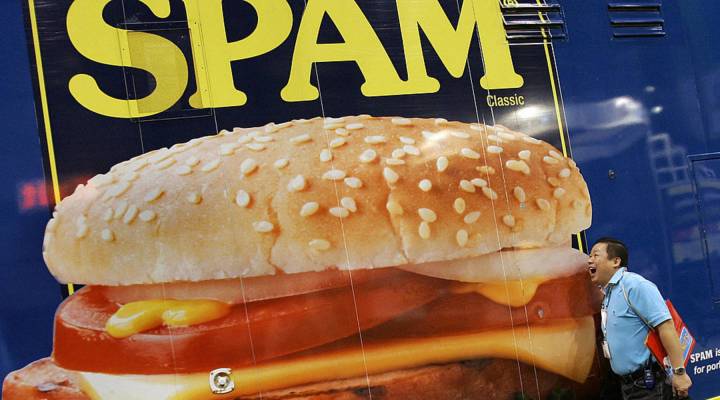 It’s the week of meat. We mark Fourth of July by grilling up a storm and eating millions of hotdogs. The very next day, on July 5, we are celebrating another classic American staple: Canned meat. Just a day after America’s birthday, Spam is celebrating a milestone of its own. The popular meat product is turning 80 years old.

To mark this occasion, let’s do the numbers on Spam.

Americans were first introduced to Spam on July 5, 1937. Unable to come up with a name for the canned goodness, its maker, Hormel Foods, held a contest to solicit suggestions. The $100 price went to actor Kenneth Daigneau, according to Mental Floss. The name is supposed to be a contraction for spiced ham.

Despite its presentation, Spam is no mystery meat, the company insists on its website. Its six ingredients are: Pork with ham, salt, water, potato starch, sugar and sodium nitrite. To make Spam, Hormel processes almost 20,000 pigs a day. Spam comes in 15 different varieties and is sold in 44 countries. Over 8 billion cans of Spam have been sold so far.

Spam — which has been called a “war-time delicacy” by Margaret Thatcher — tends to increase in popularity during economic downturns.

As food prices started to rise during early 2008, sales of Spam increased. During February, March and April of that year, Spam sales went up by 10.6 percent compared to the year before, according to Nielsen. In May 2008, Hormel reported that strong Spam sales led to a 14 percent increase in profits. Throughout the Great Recession, its sales continued to grow. In 2011, Hormel sold 122 million cans of Spam — up 11 percent from 2009, according to Bloomberg. Most recently, according to Adweek, Spam made its way into a third of American households.

To get that other two thirds of Americans to give Spam a try, Hormel advertized its meaty product during this year’s Super Bowl, when ads cost around $5 million for 30 seconds. It’s 15 second spot consisted mostly of images and sounds of frying Spam.

“We’re transitioning into our 80th anniversary year, and we centered on one thing we know to be true: When people hear the sizzle of Spam, it gets them to start craving it,” Nicole Behne, Hormel’s marketing director, told Adweek.

To celebrate its 80th anniversary, the company has launched 80 days of summer — er, I mean 80 days of Spam. The countdown started in April when the company gave away 1,800 cans of Spam to its employees. The official 80th anniversary celebration will take place at the Spam Museum — yes, that is a thing that has existed since 1991 — on Friday July 7.

And finally, because you are probably wondering: What does Spam the meat have to do with spam the email? Well, it’s all thanks to a Monty Python skit about a restaurant that serves only items containing Spam. Apparently early users of internet chat rooms used to annoy other users by dumping the lyrics from the skit into the chat system, according to Mental Floss. The term stuck despite Hormel’s efforts to distance itself from the email form of spam. In 2002, the company files a trademark infringement lawsuit against Spam Arrest, Spam Buster and Spam Cube, but a judge dismissed the suits.