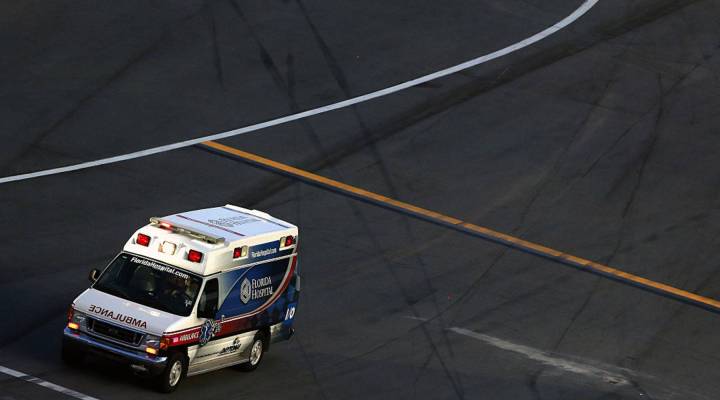 “When I took that phone call, and I learned that this was just going to completely uproot my whole life, I’d say I spent maybe 10 seconds or so only freaking out about myself and whether or not I would die. And then immediately thought, ‘Oh my gosh, what happens if my health insurance goes away?'” Young said.

She had just signed up for health insurance at the beginning of this year on one of the health care exchanges created through the Affordable Care Act. While her insurance covered most of her health care expenses, when she’s finished with chemotherapy this fall, she will start radiation therapy, which could be a big out-of-pocket expense since no one in her network provides the treatment.

So two of Young’s friends decided to lend a hand. They started two crowdfunding campaigns on GoFundMe to help raise a financial cushion for her. The money raised has been “an enormous emotional relief,” Young said. It “has been a really great way to have some peace of mind knowing that this is not going to throw me into absolute financial crisis for the rest of my life.” She anticipates that the money raised by her friends will be very helpful in paying for her radiation treatment.

Young is hardly alone in relying on online fundraising to help pay for medical treatments and associated costs of illness. GoFundMe, the largest crowdfunding company in the industry, has raised over $930 million for health-related causes on its site, according to a 2016 NerdWallet report.

Crowdfunding may help many people afford the treatment and health care they need, but it does not help all of them equally.

Professor Nora Kenworthy is among those concerned that crowdfunding can be biased. Not everyone has equal success on crowdfunding platforms, because people have different levels of medical literacy, social-media savvy and access to video-making equipment — the things that make a campaign successful. Kenworthy refers to it as “your ability to market yourself and your illness.”

In a study with media professor Lauren Berliner, Kenworthy looked at 200 randomly selected health care related campaigns on GoFundMe. The average amount of money the campaigns raised was only $3000, which Kenworthy said is “really hardly enough to prevent medical bankruptcy or pay much larger health care bills.” And only 10 percent of the campaigns they looked at reached their goals.

The study found that the crowdfunding campaigns which struggled the most to get funding were those for people with “multiple and overlapping health and social crises that are going on in their lives.”

Kenworthy shared this comic strip with us: a heart-breaking, real-life example of someone falling through the gaps of the crowdfunding safety net. The image above is an excerpt.

“These are the people for whom crowd-funding is often least successful, because it’s hardest for them to articulate a single, solvable problem that can be marketed to their networks,” Kenworthy said.

That raises an important question about the gaps in the health care system that people are forced to fill with crowdfunding.

“This is reflective of a broader economic trend towards what we’re thinking of as ‘flexible’ economies where people are more responsible for their own survival and have less of a social safety net. And unfortunately in this particular crowdfunding economy, your responsibility for your survival links to your ability to market and promote your own illness,” Kenworthy said.

And if you’re unable to promote your illness, and raise the money you need, you might be out of luck. That’s why, Kenworthy said, crowdfunding might not be the perfect solution for everyone. “It’s not the life raft that we might think it is.”