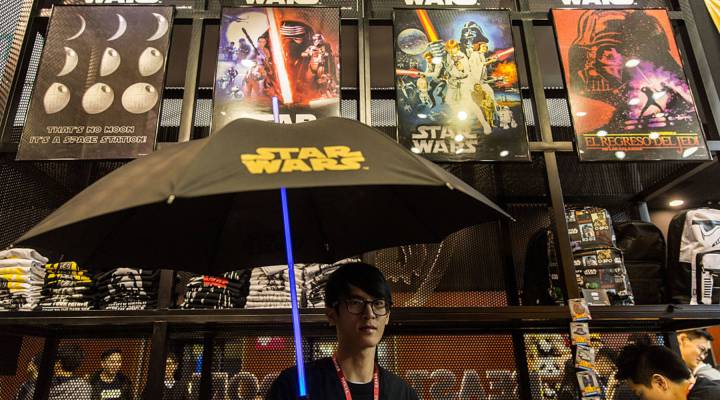 COPY
A member of staff demonstrates a Star Wars Jedi 'Lightsaber' themed umbrella at the 'Toy Soul 2015' exhibition in Hong Kong on December 19, 2015. The exhibition which runs from 18-20 December is geared towards local artists and toy developers showcasing new products. ANTHONY WALLACE/AFP/Getty Images

The latest installment in the Star Wars film franchise, “Rogue One”, comes out Friday, December 16th. And though many people are excited for its release, some are not, including Stephen Galloway, Executive Editor for Features for the Hollywood Reporter, who recently wrote an article titled “Why I Hate Star Wars.”

On when this film became a franchise:

Well, it did it very early, because when the film appeared in 1977, it really transformed Fox’s fortunes, the studio that made it. Up to that point, nobody had thought of merchandising and licensing. Since then, that’s become a far more important element for companies like Disney, which very shrewdly bought Lucas Film, as it bought Marvel, because that brings in far more revenue.

On what makes it perfect for sequels:

Well, one thing is it had characters who were simple, and clean, and clear, and memorable. And that tied in with another great change that began to take place in the 1970s, which is the studios started turning to television commercials for marketing. This simple decision had a gigantic impact on the films that were made, because you needed a movie that could be sold in 30 seconds. And that in turn led to what was called “high concept” film making: an idea so simple that  in one sentence, you knew you wanted to see it.

There’s absolutely nothing wrong with that, unless it precludes other things from being made. If you want to see my favorite film 0f the year, “Moonlight”, which cost under $5 million, there are no sequels, there is no merchandising, there are no theme parks. I mentioned that in the 1970s that one of the great changes was the way films were marketed. The other great change was the ownership of the studios. Corporations don’t want “Moonlight.” They want films that predictably bring in money so that they can do their predicted profits and losses, looking ahead several years. That is anathema to creativity.