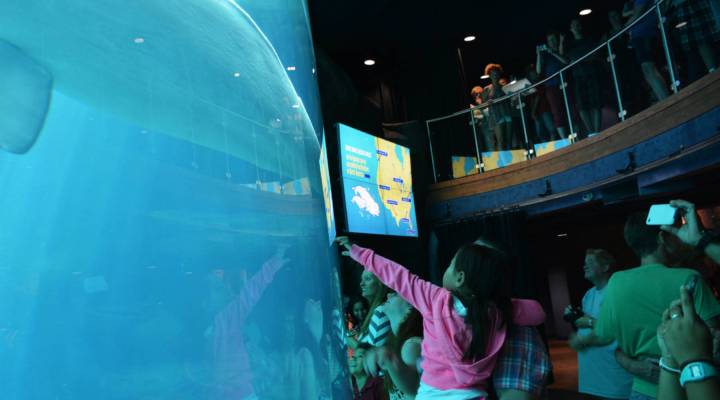 COPY
Visitors gather at the Georgia Aquarium's beluga tank. Some pull out phones for pictures, others reach out to the glass as if they can touch the whales as they slip by.  Sam Whitehead

Visitors gather at the Georgia Aquarium's beluga tank. Some pull out phones for pictures, others reach out to the glass as if they can touch the whales as they slip by.  Sam Whitehead
Listen Now

Want to see a beluga whale in captivity? You might want to hurry.

The cute, white whales are on their way out of this country’s aquariums. According to data from the National Oceanic and Atmospheric Administration, there are only 26 in captivity in the U.S., and their numbers are shrinking.

That’s put the Georgia Aquarium in Atlanta in a bit of a tight spot, especially when you consider that 2 million visitors flock there each year to see the aquarium’s four beluga whales (and the rest of their animal collection).

One recent estimate says the aquarium has had almost $2 billion worth of economic impact on the state of Georgia since opening its doors in 2005.

But U.S. aquariums are running out of belugas — and would like more.

“The question is: ‘What kind of investment do you want to make in order to sustain your population?’” said Georgia Aquarium CEO Mike Leven, who has that question on his mind these days.

One way he could sustain his population? Buy more whales. But — and perhaps this comes as no surprise — whales aren’t cheap.

“If we could get the right beluga whales at breeding age and whatever, it could be a seven-figure purchase,” Leven estimated.

The Georgia Aquarium recently tried to import 18 wild-caught belugas from Russia, but they ran into a major obstacle: the Feds. As it turns out, the U.S. government has a say whenever marine mammals are brought into the country.

“I like to say: ‘In government, there’s a form for that,’” said Nicole LeBoeuf, acting deputy director of the National Marine Fisheries Service’s Office of Protected Resources.

Her agency enforces the Marine Mammal Protection Act, which regulates the import of marine mammals like belugas. To get approval, you to have to meet a litany of standards and suffer the slings and arrows of a public comment period.

“It really is on the applicant to demonstrate that they’ll be able to care for this animal in the short and the long term,” LeBoeuf said.

Inside the Georgia Aquarium on a busy summer weekday afternoon. The aquarium estimates 2 million people visit each year.
Sam Whitehead

You’d think the Georgia Aquarium could look after the whales they were looking to import, but their permit got denied. The Feds didn’t want to encourage ocean trappers. In the end, the aquarium spent $6.5 million for exactly zero whales.

Naomi Rose, with the Animal Welfare Institute, said that’s a good thing. She thinks the aquarium should consider a Plan B, like moving its whales from tanks to an ocean sanctuary.

“That’s all I’m asking them to do. I’m not tell them to go out of business. I’m not trying to shut them down,” she said.

But that’s not the Georgia Aquarium’s plan, at least for now. They want beluga whales, and CEO Mike Leven said they’re willing to go through the process again, this time with an aquarium owner in Canada.

“We’ve worked with him over the years. We’d like to go there if we can,” Leven said.

It may take years to get them. But, as the saying goes, where there’s a whale, there’s a way.