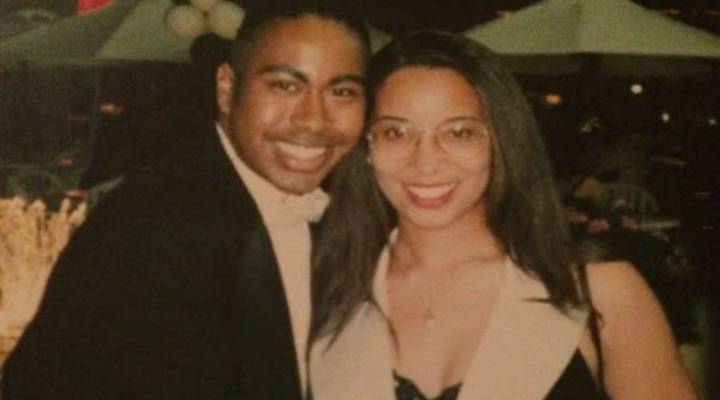 Nicole Childers with her friend Martin Christopher Harper at the prom in San Diego in 1995. Nicole Childers/Marketplace
My Biggest Financial Lesson

The day after my high school graduation, at the age of 17 and with an acceptance letter to an Ivy League university in hand, my foster mother asked me to move out of her house in San Diego.

I was never sure why. I was a good kid. I had just graduated with honors, never got into any trouble, and I had secured a summer job. Suddenly my visions of getting on a plane at the end of the summer to start a new chapter, outside of a world where I’d been either at the mercy of an abusive parent or an overwhelmed and unpredictable foster care system, faded instantly. Now I had to find a new place to live, or take my chances in a group home or another temporary foster home placement.

As I contemplated my now limited options, a wave of regret overcame me. I regretted allowing myself to believe that that one acceptance letter meant I no longer had to worry about my future. I regretted every Reese’s Peanut Butter Cup or cassette tape I’d bought with the little bit of money I’d made working an after-school job. I had allowed myself to grow too comfortable in my foster home, when I should have been saving for a plane ticket to Philadelphia.

Just a day earlier, I had walked down the aisle at my high school graduation to receive my diploma with my head held high, convinced that I was finally close to having it all. College was supposed to provide me with a fresh start and the basic level of stability I had been missing: a safe roof over my head and three meals a day until graduation. But first I had to avoid homelessness.

An adult who worked at a school I had once attended, whom I won’t identify because she could have gotten into trouble for helping me, came and picked me up. I ended up living with her for that summer rent-free. She bought my plane ticket to Philadelphia, and a friend of hers paid for my books my freshman year at the University of Pennsylvania.

If it hadn’t been for their generosity, I’m not sure I would have made it to college. Aside from my financial concerns, feeling rejected by my foster parents without explanation took a big emotional toll on me. Had I been out on the street or forced to live with strangers who ostensibly would have had little to no investment in me or my success, I’m not sure I would have had the fortitude to figure out a way to get there.

That one incident with my foster family left an indelible impression on me throughout my college career. The summer before my senior year, I became an intern for Diane Sawyer at ABC News. After I graduated, I moved to New York to work there full time. I was suddenly thrust into a life that exceeded my wildest dreams. Just a few years earlier, I had been a kid in foster care with nary a penny to my name, and now I was working for one of the top media companies in the world with some of the highest-paid TV news anchors. I was surrounded by glitz and glamour, but, as an entry-level desk assistant, my personal financial reality stood in sharp contrast.

So I lived paycheck to paycheck in a small Spanish Harlem studio. Every pay stub arrived coupled with the memory of the day after my high school graduation, reminding me that no matter how far I’d come, I was still one curveball away from losing it all. I racked up credit card debt buying groceries and other basic necessities so I could use part of my salary to put into savings, just in case. If I lost my job for whatever reason, I had no parents to go home to or help me while I got back on my feet. I had learned early on that I would always have to be my own backup plan.

By the time I was 27, I had been promoted into a senior leadership role at another company, and my salary reached six figures. In the decade since, however, the industry has contracted and I’ve been laid off twice. Both times I had enough savings to make ends meet. During the periods of unemployment, I did everything from editing books to working as a celebrity branding and social media consultant. No matter how much money I’ve made in full-time jobs since then, the fear of losing it all still lingers.

I don’t bear any ill will toward my foster family for abandoning me. I see the situation as an unfortunate personal twist of fate that taught me an early but important lesson about success and money. The more successful you become and the more money you make, the easier it is to get caught up in and enamored of both, but neither is guaranteed for life. And that is a lesson I will forever be grateful for.