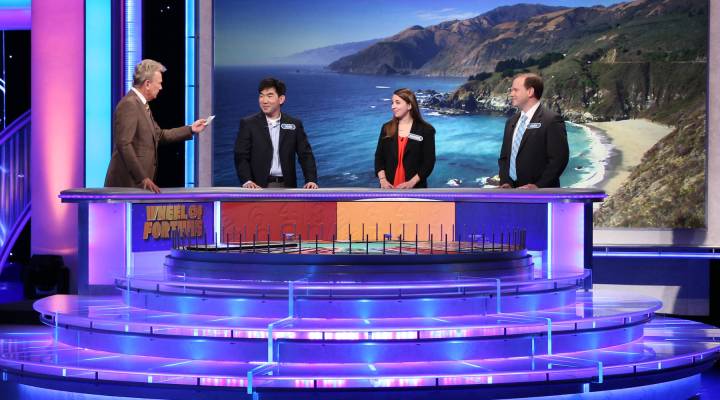 Game-show winner pulls back the curtain on prizes

Game-show winner pulls back the curtain on prizes

That’s me, at the red position, talking to Pat Sajak on “Wheel of Fortune,” during an episode in April 2014. I’ve taken my fair share of cash and prizes from three different game shows, $77,421 worth of stuff by my count.

After doing my fair share of winning – and losing – I started to wonder where all the money come from, in the off-chance that this bit of trivia shows up in my question stack when I inevitably try my hand at “Who Wants to be a Millionaire.”

Art Alisi, president of Promotional Considerations, Inc., offers an answer. The network “may give them, let’s say, $50,000 a week for their prize budget,” he says. “And the show wants to give away $150,000, so they have to use the fee spots, and that brings them the extra revenue that they’re looking for.”

These fee spots are usually shown at the end of the show, and the revenue from these spots is funneled into the weekly prize budget.

Because “Wheel of Fortune” and “Jeopardy!” have been the top two game shows in syndication since roughly forever, they command a high price for these 10-second promotions. The typical going rate for one of those spots is $15,000, Alisi says.

While that money is used to pay for any cash prizes given away, the show can also use the funds to buy other material prizes, like cars. Buying prizes is common on “The Price is Right,” which made it difficult for Alisi to secure cars when he worked for the original “Hollywood Squares” in the ’60s and ’70s, he says. In those days, shows could easily obtain cars for free from dealers, he says. After “The Price is Right” debuted in 1972, other shows had a hard time obtaining cars, because it was more lucrative for the dealers to sell a car to “The Price is Right,” which typically offers two or three cars per show, instead of contracting out a car to another show.

But the shows don’t buy every prize you see on the air. Trips, for example, are almost never purchased but are obtained via contract, as former “Wheel of Fortune” prize coordinator Adam Nedeff explains. That involves cold-calling hotels and airlines and making a detailed sales pitch. “At the time, we would contract them for two trips. The first trip was for the ‘Prize Puzzle,’ a guaranteed win,” he says. The second would go to a viewer who played along from home.

Accepting a prize, or not, is up to the contestant.

Shows give contestants the option to forfeit prizes, and I took advantage of that after I had my “Price is Right” showcase handed to me on a silver platter.

My big prize was a five-hour private jet flight, valued at $25,000, that came with all sorts of stipulations — the plane would only take me 2½ hours outside of Los Angeles, then 2½ back. I had to spend at least two days in my destination before returning home and any expenses incurred in my destination city were my responsibility….

To save myself the headache, I just forfeited the prize. I didn’t get anything in return, and I couldn’t have sold the plane ticket even if I did accept it. But I also didn’t have to pay taxes on that prize.

Prizes that aren’t accepted are a good deal for the show. That five-hour private jet trip I forfeited went back in the show’s inventory. If the show wants to, the prize can be offered again, although it might be packaged differently.

“Maybe then, next time they do it, they’ll give you a hotel in Vegas. So now the prize becomes $30,000 — and they already have the credits since you forfeited the prize,” Alisi says.

Then again, if you can’t use the prize (as long as it’s not a trip, where you have to be one of the two people taking it),  you might know someone who can — as eight-time game show contestant Dan Avila did after he won six pairs of women’s shoes on “Sale of the Century” in the ’70s.