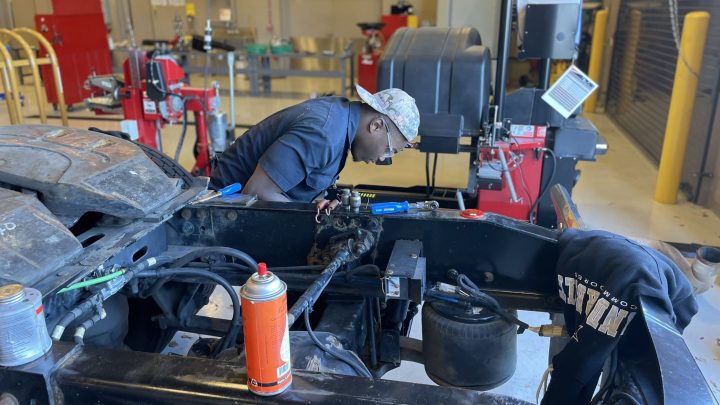 COPY
Jonathan Ellis says he chose a diesel and heavy equipment certificate "because when COVID happened, there weren't as many cars on the road, but the number of trucks on the road stayed the same.” Above, he replaces the brakes on a truck. Stephanie Hughes/Marketplace

Jonathan Ellis says he chose a diesel and heavy equipment certificate "because when COVID happened, there weren't as many cars on the road, but the number of trucks on the road stayed the same.” Above, he replaces the brakes on a truck. Stephanie Hughes/Marketplace
Listen Now

At the Tennessee College of Applied Technology in Nashville, a group of students is standing around a bright red motor, measuring its parts down to the ten-thousandth of an inch. They’re just beginning the school’s diesel mechanics program.

All these students have a clear reverence for their instructor, Pat Dillard, who spent about 40 years working in the diesel industry.

“I have been around the world mechanicing. I was in Alaska, working there,” Dillard said.

Don’t forget about Antarctica, one student reminds him. The bear stories from Alaska are awesome, another adds.

“I would never have gone anywhere without having a good career,” Dillard said.

The promise of that good career is why these students are here. Across the country, college enrollment dropped significantly during the pandemic, and that decline has, for the most part, continued. But skilled trade programs saw growth in the spring, according to the National Student Clearinghouse Research Center. The programs are not focused on history or calculus, but rather on training students for specific jobs.

There are a few hot areas of study, including mechanic courses and precision production programs, like metalworking, which both saw continued jumps in enrollment this fall. In a tight labor market, some students want to get in and out of higher education as quickly as possible, which makes trade programs attractive.

“No college debt. Making bank immediately. Making as much money as possible,” said Garton, who lives in Hendersonville, about 30 minutes down the road from Nashville.

The median pay for a diesel technician was $48,690 as of May 2021, according to the Bureau of Labor Statistics. This particular diesel program lasts 20 months, and tuition is $6,680. But like the majority of the students at Tennessee’s technical colleges, Garton doesn’t pay anything. State programs — Tennessee Promise and Tennessee Reconnect — cover tuition costs for most residents who complete the Free Application for Federal Student Aid.

Garton was thinking about becoming a cardiovascular surgeon, but the pandemic made her reconsider. Plus, she feels comfortable in a garage.

“I grew up around cars, pretty much. My grandfather owns an old hot rod lot in Hendersonville, and I just kind of picked up some things along the years, and now I’m here,” Garton said.

In the next room, which is actually a garage, 21-year-old Jonathan Ellis is itching to get back under the truck cab where he’s replacing the brakes. He said he likes learning from people who’ve been in the field.

“It makes it easier to have an over-standing, rather than just a basic understanding of everything that we need to know,” Ellis said.

Ellis will graduate in April with his certificate in diesel and heavy equipment. He’s already working a few days a week at trucking company Western Express.

“I looked up jobs that were a necessity and jobs that I could do, and diesel was the one that I chose,” Ellis said. “I almost chose auto mechanics. But I didn’t choose that, because when COVID happened, there weren’t as many cars on the road, but the number of trucks on the road stayed the same.”

The school’s accreditation hangs on how many students get positions in their fields after graduating. Other trade programs there include cosmetology, nursing and early childhood education. All of them last 20 months or less and lead to different wages.

Employers are hungry for workers, according to college President Nathan Garrett. “If we double the capacity, we’ll still not graduate enough students to meet the needs of industry in this area.”

The school has about 1,500 students. Last year, 74% of them graduated. (That’s higher than the national average for certificate programs; in 2012, about half of those students finished within three years.) Of those who graduated, 82% found jobs immediately.

“We know that the way adults learn is in short bursts of theory, and then application immediately,” he said. “That’s really what technical colleges do.”

Still, technical college can be a hard sell for high school seniors who equate college with a bachelor’s degree. The majority of full-time students at technical schools in Tennessee are adults who aren’t straight from high school.

“Tennessee is still, like all the other states, reckoning with how you make that a more viable option students pursue as they go direct from high school to college,” said Russ Deaton with the Tennessee Board of Regents, which oversees the state’s community and technical colleges.

“So there’s an interesting tension between the growth of technical education and the goals of talent development and economic mobility,” said Joshua Wyner at the Aspen Institute.

There are also tradeoffs to having training that provides a lot of depth but less breadth.

“You may be enrolled in a training program that gives you the skills for today, but not for tomorrow,” said Zack Mabel, professor at the Georgetown University Center on Education and the Workforce.

At the technical college in Nashville, 24-year-old Abbey Carlson is studying welding. She’s not focusing only on the money; she also likes learning the trade.

“It’s not boring, ever. Every day, it’s exciting to do it, and it’s a lot of work. But how hard you work pays off,” she said. “You can come in here and kind of put your half best into it. But that’s what you’re going to see. I mean, it’s kind of an art form.”

An art form that — right now, at least — is in demand.