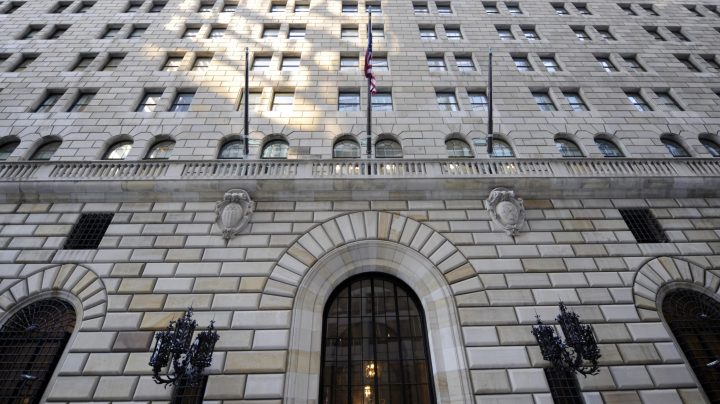 COPY
Federal Reserve policies that increase interest rates and chill economic growth are aimed at bringing down inflation, but they can also put stress on households and businesses. Above, the headquarters of the Federal Reserve Bank of New York. Timothy A. Clary/AFP via Getty Images

Federal Reserve policies that increase interest rates and chill economic growth are aimed at bringing down inflation, but they can also put stress on households and businesses. Above, the headquarters of the Federal Reserve Bank of New York. Timothy A. Clary/AFP via Getty Images
Listen Now

Inflation is still at a multiple-decades high, and the Federal Reserve is being aggressive in its efforts to reduce it. Chair Jerome Powell spoke Thursday at the Cato Institute’s Monetary Conference, where he signaled that the Fed’s campaign of interest rate hikes will continue.

Powell struck a similar tone at the Jackson Hole Economic Symposium last month, promising that higher interest rates and slowing economic growth will bring down inflation, but noting that it can also bring pain to households and businesses.

Michelle Holder, associate professor of economics at the City University of New York and a senior fellow at the Washington Center for Equitable Growth, says the economic pain that comes with rising interest rates will impact Black and Latinx workers more than others. She spoke with “Marketplace” host Kai Ryssdal about the consequences of Federal Reserve policy for marginalized communities.

Kai Ryssdal: You watched Powell’s speech a week, 10 days ago, and he makes it really clear there’s gonna be some pain. As the trained economist in the room, what did you think he was meaning?

Ryssdal: We’re gonna break down who feels the pain and how they feel it in a second, but I want to be clear here. He is plainly saying that he and the Federal Reserve believe that the pain of inflation is worth the pain of higher unemployment.

Holder: Yeah. I don’t agree with that sentiment, I think if you weren’t —.

Holder: Yeah, that is what he’s saying. All right.

Ryssdal: Well, now go on and explain to me why you disagree.

Holder: Yeah, I disagree. Because, you know, it’s pretty straightforward and simplistic, but the Fed does have a dual mandate. Not just, you know, maintaining price stability, but also maximizing employment. And so, in this speech, it was very clear that he was prioritizing inflation over unemployment. And I think if you really ask the average person in America, would they prefer to either have a job if they are working — right, if they are engaged in the labor market — or pay higher prices for goods? I think they would typically say, “I’d rather have a job.”

Ryssdal: OK. So to your earlier point, Powell says this, at some point in this very brief speech he made the other day, “The burdens of high inflation falls heaviest on those who are least able to bear them.” Your point, in your disagreement with the chair, is that unemployment is going to come fastest to Black workers, to Latino workers, to those at the bottom end of the income spectrum.

Ryssdal: All right. So look, let me poke you in the eye for a minute and ask you this. Should Powell and the Fed just stop raising rates and worrying about inflation? What’s the option here that they have?

Holder: Right, happy you asked that question. Because, as an economist, I understand and I agree that the Fed has to act, and the Fed has acted. In fact, it’s raised interest rates three times already this year. So it is engaging in what we would want our central bank, our Federal Reserve bank, to do, which is to try to tame inflation. But, you know, I think the key is how fast are these rate increases going to continue? And how high will they continue to go? The Fed has been pretty aggressive for the first half of this year into July. My hope is that it begins to moderate, you know, how far it’s going to push the pedal to the metal in terms of trying to tame inflation, because it does have this balancing act that it has to strike.