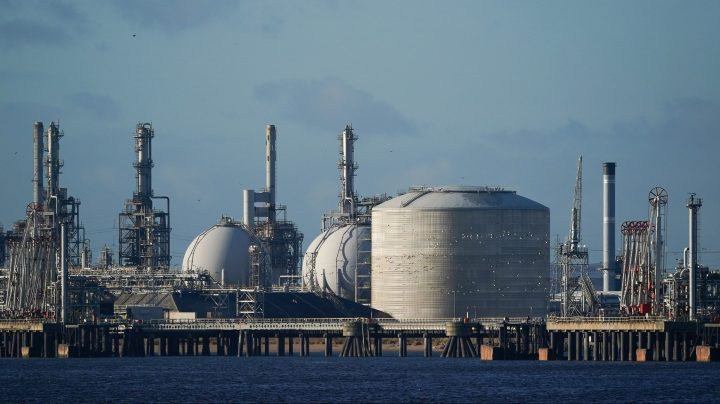 COPY
A natural gas processing plant and terminals in England. The average UK household energy bill has rocketed by over 200% in the past year, with more increases looming. Ian Forsyth/Getty Images

A natural gas processing plant and terminals in England. The average UK household energy bill has rocketed by over 200% in the past year, with more increases looming. Ian Forsyth/Getty Images
Listen Now

Not since the U.K. poll tax revolt of 1990 helped sweep then-Prime Minister Margaret Thatcher from power have the Brits been in such a rebellious mood. More than 100,000 of them have reportedly pledged online to refuse to pay their natural gas and electricity bills this fall unless the government takes further action to defray the escalating cost of household energy.

It’s easy to understand the growing anger and militancy. Natural gas is used heavily in the United Kingdom — the fuel heats the vast majority of British homes and plays a major role in electricity generation — and so the post-pandemic upsurge in demand, compounded by cuts in Russian supplies, has hit the nation hard.

According to National Energy Action, which campaigns for affordable energy, the average cost of heating and powering a British home has rocketed by over 200% in the past year. Another 80% hike is expected in October and a further 20% in January.

“Prices have exploded, and this is having a devastating impact on people’s finances,” said Adam Scorer, the NEA’s chief executive. “A household in fuel poverty is one that has to spend 10% of its income or more just to have a basic level of heat and electricity. A year ago there were around 4 million British households in that position. By October, we expect there to be 11 million. So we’re not just talking about folk on the lowest incomes, but a third of all households won’t be able to afford the cost of a warm, safe and powered home.”

Hannah Absalom, a Ph.D. student at Birmingham University, has found herself in that unfortunate category. And she finds it highly ironic, since the subject of her thesis is the psychology of poverty.

“I have to say I didn’t expect to be in this situation when I started studying this subject,” she said. “But today I am in very squeezed financial circumstances, asking myself, ‘How do I feed myself affordably? How do I heat myself affordably?’”

Absalom’s modest salary as a university research assistant simply will not cover the further doubling of her heating and electricity bill that’s expected this winter.

“I find it bitterly laughable how much they’re suggesting people are going to have to find, including myself. I haven’t got any more money to give,” she admitted.

So what’s to be done?

Absalom describes herself as “too anxious” to stage an act of civil disobedience and to refuse point blank to pay her energy provider. But more than 100,000 of her fellow Brits, according to a new movement called Don’t Pay UK, have no such qualms. They’ve pledged to cancel the bank transfers to their energy companies if the expected price hikes materialize in October.

Louise Martindale, a private tutor, has taken the pledge as a protest against energy inflation.

“I just thought: ‘You know what? I’m not going to just sit back and take this. I’m going to do something about it,’” she said.

Martindale is angry because her tutoring business has suffered in the cost-of-living crisis, and she’s struggling to pay for her daughter’s urgently needed medical treatment and her son’s college tuition.

Martindale said that, as a businesswoman, it went against the grain to refuse to pay a bill. But she shrugged off the possible consequences, including any damage to her credit rating.

“I think your credit rating becomes unimportant when you’ve got to decide between paying for your energy or caring for your children. And for a lot of people, that’s the stage it’s got to,” she said.

Although they rarely do it, the energy companies can cut off power and gas supplies to nonpaying households. But Tom Scott, a writer who supports the Don’t Pay campaign, doesn’t believe it would come to that.

The Don’t Pay campaigners say they’ll only go ahead with the payment strike if 1 million people sign up for it. That, Scott said, provides safety in numbers.

“I think it’s highly unlikely that if this movement does get off the ground there will be any very severe action taken against people who take part in it,” he said. “My guess is the government will be forced to move to alleviate the situation. There’s a really, really huge crisis coming our way, and the government is sitting there like a rabbit in the headlights, doing nothing. It has to be forced to act.”

The government has been immobilized. Prime Minister Boris Johnson, having announced his resignation earlier in the summer, continues in office as a caretaker and is unwilling to launch major initiatives while the two contenders to replace him slug it out in a leadership contest. Nevertheless, the government has condemned the threatened payment strike, pointing out that it has hit the energy companies with a $6 billion windfall profits tax and that it’s pumping around $44 billion into people’s pockets to help defray household energy costs this winter.

But that will barely scratch the surface of the huge increases coming down the pike. Energy — and the brewing rebellion — will be the No. 1 item on the agenda when the new prime minister takes office in the first week of September.

Meanwhile, the Brits are bracing for a very tough winter and some are resorting to ingenious survival strategies. Ph.D. student Hannah Absalom has bought an electric jacket that will keep her warm much more cheaply than heating her entire home. And there is one, albeit uncomfortable, academic benefit in her situation: a deeper, more personal understanding of the subject of her thesis.

“I am experiencing the tendrils and the tides of poverty creeping into my life,” she said.