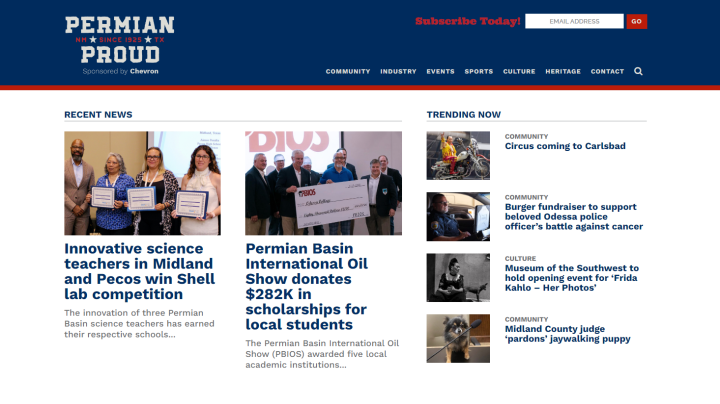 A puppy saved and returned to its rightful owner. Free back-to-school haircuts offered in Odessa, Texas. And … a new solar energy field in the Permian Basin that will reportedly lower Chevron’s “carbon intensity.”

That’s a sampling of the headlines you’ll find on a new website called Permian Proud, serving the oil basin region that stretches from West Texas to New Mexico. Now you may have noticed that one of those stories, the one about Chevron’s carbon emissions, sticks out a bit. That’s because the site is actually sponsored by oil giant Chevron and sort of operates as part-news outlet, part-corporate public relations outlet.

Molly Taft is a staff writer for Gizmodo’s climate change blog, Earther, and she took a closer look at Permian Proud for her story “Chevron Jumps Into Texas’ News Desert With Stories About Puppies, Football, and Oil.” The following is an edited transcript of her conversation with Marketplace’s Andy Uhler.

Andy Uhler: So set the scene for us here. You go to the Permian Proud website. What sort of things are you seeing? It’s not just strictly, “Hey, oil and gas is great. These are the great things we’re doing,” right?

Molly Taft: Sure, yeah. And I think that’s one of the trickiest things about this, right, is to Chevron’s credit, they’re not hiding that they paid for this. Chevron is in the logo, you know, there’s a footer saying it’s paid for by the Chevron Corporation, there’s a big Chevron ad in the middle. But the front page is actually mostly local news events. And it takes a little bit of scrolling around and really like checking out the site to kind of get a better sense of what it’s about.

Uhler: You reached out to Chevron. What did they say about the site?

Taft: Yeah, you know, I mean, they were very upfront. They said that the site was created to — I think the direct quote is “aimed at providing regional communities with information that is important to them.” They’re very much pushing this presentation of themselves as a good community partner and forming this site to disseminate positive information about the community.

Uhler: And that’s a really important part of this, right? There’s sort of a dearth in local news, just generally. And so there is space for a company like Chevron to go ahead and do this.

Taft: Exactly. And what we found from looking at statistics on local news deserts is the Permian has had a lot of losses in local news over the past 15, 20 years. And it’s [in] this vacuum that Chevron is kind of introducing this new site. And I think that’s what makes it so worrisome.

Uhler: And it’s interesting, too, because what Chevron’s doing is by no means illegal. It’s just not really in the spirit of journalism, it doesn’t seem, right? Is that sort of the take?

Taft: There was a story, I believe The Miami Herald reported on a utility in Florida basically [bankrolling] this news website to publish positive information about the utility. So this is not what’s going on here. I want to be very clear: Chevron has been very upfront. But honestly, that’s even a little bit more nefarious because they feel confident in their standing as a recognizable company. And to be fair, they provide a lot of jobs in this region. It’s an incredibly important industry for folks living down there. There may not be immediately a reason for an average reader to distrust something presented by Chevron.