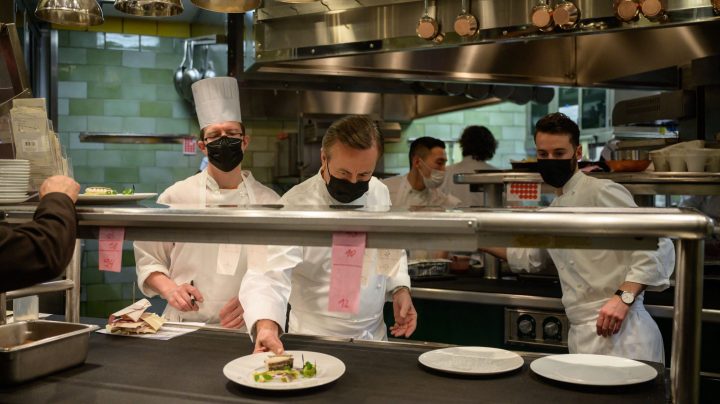 COPY
Employers across industries are getting creative as more workers take time off. Ed Jones/AFP via Getty Images

Employers across industries are getting creative as more workers take time off. Ed Jones/AFP via Getty Images
Listen Now

If you feel like you’ve been getting an unusual number of out-of-office replies when you send an email at work, you’re not alone. There’s been a big increase in workers taking time off this summer, according to the Bureau of Labor Statistics and the Census Bureau.

In June, nearly a million more people took vacation days than last year. And between June 29 and July 11, nearly 4 million were either out sick with COVID-19 or caring for a loved one — that’s almost double the number from the same time last year.

Bottom line: COVID is still weighing heavily on this economy.

As chief operating officer of Phil Stefani Signature Restaurants in Chicago, Steven Hartenstein usually doesn’t do much cooking. But he’s been spending more time in the kitchens of the businesses 12 restaurants.

“Partially for camaraderie, partially to learn and partially because we’re short-staffed,” he explained.

It’s a big weekend. The company has a few booths at the Lollapalooza music festival. But he said it’s been like this all summer. Employees are taking about 40% more time off. He doesn’t want people coming in sick, and he knows they need a break.

“And yet, if you’re blessed enough to be constantly busy, it puts you in a quandary,” Hartenstein said.

A quandary that’s often unpredictable. When he’s in a pinch, he sometimes calls former employees to fill in. But mostly he’s been cross-training workers on how to bus tables, serve guests and bartend.

Wheaton said businesses are either trying to hire extra workers or reduce output. Of course, both of those options come with consequences — for businesses and for consumers.

“Whether it’s groceries or whether it’s cars, if you can’t get enough of the product in, demand is higher than supply, you charge more money,” he said.

This is the cost of doing business for now. And maybe forever. Caroline Walsh, an HR analyst at Gartner, said employees are no longer shy about taking time off.

“Workers care more about their work-life balance and are actually rethinking the role that work plays in their life,” she said.

And that means people are less likely to leave any amount of time off on the table.