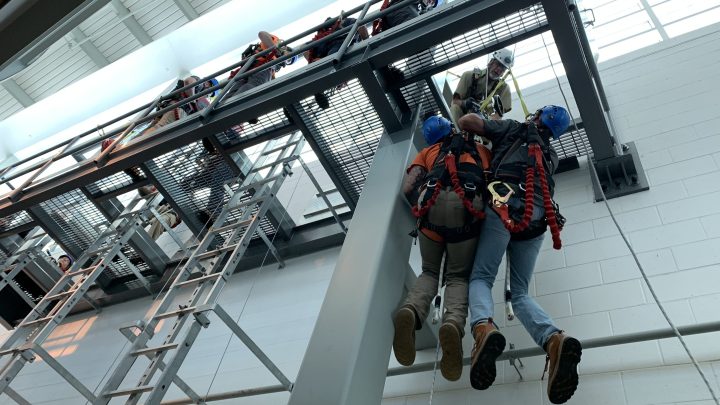 By next year, if all goes according to plan, Massachusetts will start getting power from wind turbines some 35 miles off the coast for the first time. By the following year, Vineyard Wind, the first major offshore wind project in the country, should be producing enough electricity to power 400,000 homes and businesses. The Biden administration’s goal is to have enough offshore wind projects online by 2030 to power 10 million homes around the country — and create 77,000 jobs in the process.

The promise of lots of new, good-paying jobs is a central selling point with most renewable energy projects. And, for the Biden administration, with the clean energy transition in general.

“When I think about climate change,” the president frequently says, “I think jobs.”

But the reality is, it’s not always easy to find people for jobs in a new industry. In offshore wind, which is well-established overseas but just starting to get off the ground in the United States, “it’s a huge challenge,” said Jennifer Cullen, senior manager of labor relations and workforce development at Vineyard Wind.

“We are looking to get a workforce who has a lot of skills, but has not yet built massive offshore wind farms, integrated into the project. So the training between where our workforce’s current skill sets are and where they need to be in order to construct offshore wind, there’s a gap there that we’re working to address.”

In Massachusetts, Vineyard Wind is working with local labor unions, colleges and universities, companies, organizations and the state, which is investing millions of dollars in workforce training, to identify where those gaps are and figure out how to fill them.

A lot of that work is still in the early stages because, until last year, it wasn’t clear if or when Vineyard Wind — or any other commercial offshore wind projects — would get the go-ahead.

“We’ve been looking at this for about 15 years, knowing that this was a huge opportunity,” said Jennifer Menard, vice president of economic and business development at Bristol Community College in Fall River, Massachusetts. “But as you can imagine, we only wanted to really offer this [once] there were jobs available for our students.”

Now that construction is underway on Vineyard Wind, and there are more offshore wind projects on the horizon along the East Coast, BCC and other colleges and universities in Massachusetts are increasing their offerings in offshore wind, adding classes and degree programs. More are popping up all the time.

Massachusetts Maritime Academy on Cape Cod now offers a safety training class twice a month, designed by the nonprofit Global Wind Organisation, that is required to work offshore. Over the course of three days on the university’s Cape Cod campus, students learn first aid and safety skills, fire awareness, how to work at heights and sea survival. There’s a lot of demand for the class.

On a Tuesday in late June, Day Two of the safety training at Mass Maritime is all about working at heights — how to climb a wind turbine, evacuate from one in case of emergency, and how to perform rescues on a turbine ladder, way up in the air.

There are a dozen people here, the maximum, for each class. Many are electricians and iron workers from local trade unions, hoping to get hired to help build Vineyard Wind.

Greny Bartelus, an apprentice electrician with the International Brotherhood of Electrical Workers Local 223 in southeastern Massachusetts, said she has never done any work at heights. Before it was her turn to climb the makeshift wind turbine and evacuate from it by rope, she was scared, she said. “But then actually doing it, I was like, ‘This is not that bad!’”

The makeshift turbine they are training on today is about 24 feet high; the wind turbines they might be going up on would be 300 or 400 feet high and miles out in the ocean.

“It does seem kinda daunting when they’re talking about heights and huge deep sea,” Bartelus said.

But she’s intrigued and excited about the prospect of doing something so new — and working in an industry that is new not just to her, but to pretty much everyone.

Brian Rowen is too.

“The wind turbines, I know it’s going to be a huge thing for maybe the next 20 years,” said Rowen, an ironworker with Local 424 in Connecticut. “I’ve heard that they’re going to build them from Staten Island all the way to Maine … so if I could finish my career for those next 20 years, that’s what I want to do.”

He’s hoping to get a job assembling turbines, though he doesn’t have many details yet about when companies might be hiring for those kinds of roles, or what the rhythm of the work will be like.

“I know heights don’t scare me. I have no problem being on the ocean for a month,” Rowen said. “I feel like there’s a ton of money in it. And I can’t wait.”

Shawn Dyer figures it’ll be lucrative, too. He’s an electrician, in the same union as Greny Bartelus, IBEW Local 223 in southeastern Massachusetts, where much of the work on Vineyard Wind will be taking place.

“This is a huge project,” Dyer said. “It will bring a lot of work to this area.”

It’s a part of the state that doesn’t always have a lot of steady, long-term work. And it would be a new challenge, wiring turbines.

“It’s different than your typical electrical work, going in there and wiring homes and wiring schools,” he said. “This is kinda a little radical, going out in the ocean trying to wire stuff.”

Dyer said he’s still not entirely sure how he feels about going miles offshore to work for a couple weeks at a time, but it seems like too big an opportunity to pass up.