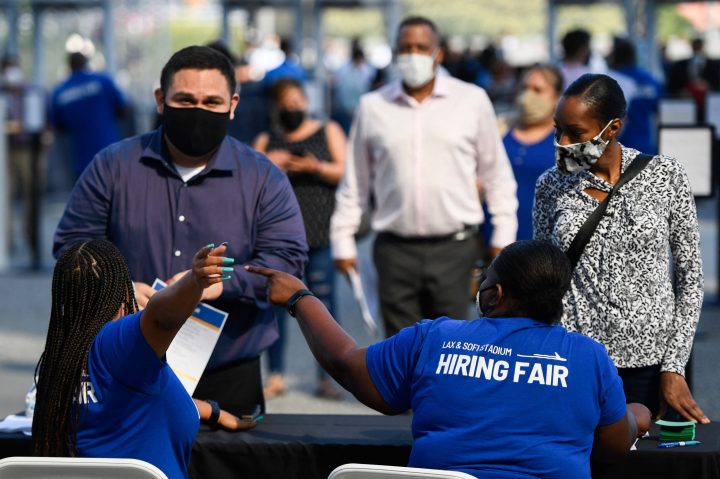 COPY
People receive information as they attend a job fair for employment with SoFi Stadium and Los Angeles International Airport employers, at SoFi Stadium in Inglewood, California. Jobless claims have been on the rise. PATRICK T. FALLON/AFP via Getty Images

People receive information as they attend a job fair for employment with SoFi Stadium and Los Angeles International Airport employers, at SoFi Stadium in Inglewood, California. Jobless claims have been on the rise. PATRICK T. FALLON/AFP via Getty Images
Listen Now

With all the tumult and uncertainty swirling around the economy — high inflation, low consumer confidence, volatile financial markets — one thing’s been pretty much rock-steady and strong: the job market.

But as the Fed’s interest-rate hikes slow economic growth — as they’re designed to do, to fight inflation — there are some signs the jobs picture is becoming a little less rosy as well, starting with unemployment claims.

The number of new claims for state jobless benefits is a pretty good proxy for how many workers are being laid off. And, since falling to a five-decade low back in March, first-time claims have now increased by 50%, to about 250,000 a week.

Andrew Stettner at The Century Foundation, a progressive think tank, sees other signs of a slowdown. “Job openings starting to come down a bit, layoff announcements in the technology sector, warehousing — and companies saying ‘well, maybe we hired too many workers,'” he said.

Stettner said the recent rise in jobless claims doesn’t signal that the job market is contracting.

But, said Tuan Nguyen at consulting firm RSM: “Jobless-claim data often predicts the end of a business cycle months ahead of time. With the recent rise, we believe the probability of a recession has definitely increased.”