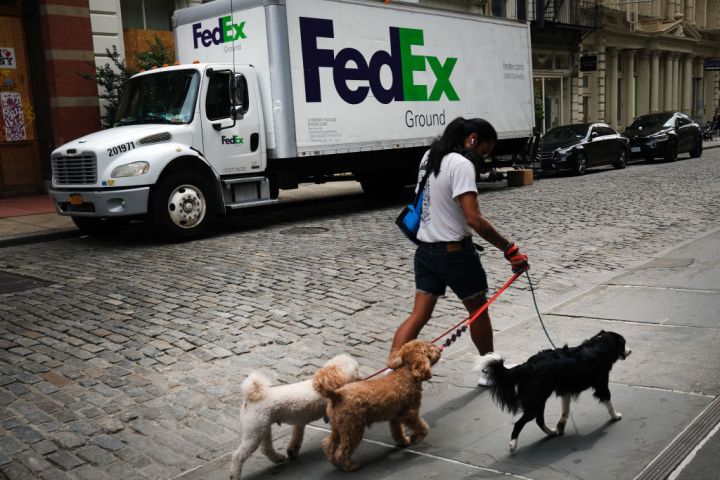 COPY
Dogs might appreciate the reduction in FedEx's Sunday deliveries, along with many drivers on rural routes. Spencer Platt/Getty Images

Dogs might appreciate the reduction in FedEx's Sunday deliveries, along with many drivers on rural routes. Spencer Platt/Getty Images
Listen Now

For a while there, it seemed like the warp speed of e-commerce was never going to slow down. Two-day shipping, next-day shipping, same-day shipping — it was only a matter of time before you yelled, “We’re out of shampoo!” from the shower and seconds later a drone would appear at the door, Pantene in tow.

Well, in an era of high gasoline prices, warp speed may not be economically sustainable. Under pressure from the contractors who do a lot of FedEx’s delivery, the company announced it will be stopping Sunday deliveries, primarily in rural ZIP codes, starting Aug. 15.

You know who would be absolutely fine with no more Sunday delivery? My dog.

Lola, a boxer mix, freaks out at the ever-present sound of delivery trucks, whose drivers aren’t fans of Lola either.

“Sundays should be given back to all of us,” said Spencer Patton, president of Patton Logistics — one of about 6,000 smaller businesses that actually do much of the delivery for FedEx. “It’s a dog-free day, not only for us but for everyone dealing with dogs barking in the background.”

He wants FedEx to stop Sunday delivery not just in rural areas, but everywhere.

“A Sunday might be as little as 10 to 20% of a normal day’s volume, but we’re still sending trucks out, and they’re still burning fuel,” he said. Fuel that got really expensive, almost overnight.

Fuel prices went up by 58%, just in the last three months, said Satish Jindel, president of logistics company ShipMatrix. “We have had such increases before, but not at the speed and of the magnitude.”

For rural communities, losing Sunday delivery wouldn’t matter so much if supply chains were working normally, said Jane Kolodinsky at the University of Vermont.