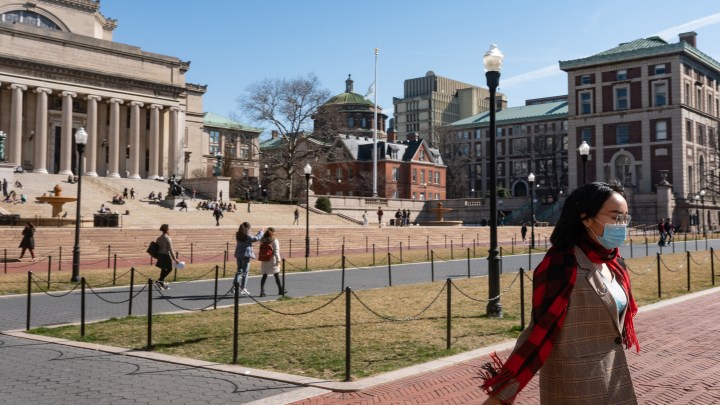 Prospective college students — like most other humans — are drawn to names they know.

“The college universe is kind of shaped by name brands,” said Jennifer Jessie, a college consultant in a Virginia suburb of Washington, D.C. “That starts really early. So if you watch any TV show, any movie in the Marvel Universe, you’ll see MIT and Caltech being featured.”

“You’ll see the rankings influence what name brands matter,” she said. “In a lot of students’ minds, especially if you’re a first-generation student or you’re a student that has been historically excluded, you want to try to play it safe. And so a name brand sometimes feels safer, even if that’s going to result in more debt.”

U.S. News & World Report, now a digital-only media organization, ranks lots of things. Diets — No. 1 is the Mediterranean. States — Washington’s first, in case you were wondering. Since 1983, it’s ranked colleges as well.

Schools submit data about things like graduation rates, average standardized test scores and how much they spend per student. They’re also reviewed by other college presidents and deans. Colleges don’t pay to be included, but ranking is a big driver of where students (and their tuition dollars) go.

The lists have been in the spotlight recently. Last week, U.S. News announced it was unranking Columbia University — formerly tied for the No. 2 spot — saying it had been unable to verify certain data the school had submitted. That was after Columbia said it was reviewing its data and wouldn’t participate in the rankings this coming year. Other schools have misreported data, including graduate schools at Temple and the University of Southern California.

So, given all this, what role should rankings play as students make one of the biggest financial decisions of their lives?

Jessie, the college consultant, said it’s critical to understand what’s included in the rankings, so students know how much weight to give them. Some things that U.S. News considers aren’t as important to students, she said — but they may not realize that. For example, she said peer reviews, or how college leaders rate other schools, are not of interest to most high schoolers.

“That’s not what a student cares about,” she said. “And a student doesn’t really know what’s in the rankings. They just know the rankings exist.”

College administrators do know what is in the rankings, and they also definitely know they exist.

“Honestly, I would have problems sleeping two or three days before the rankings came out,” said Colin Diver, a former dean of the University of Pennsylvania law school. He also served as president of Reed College in Portland, Oregon. Reed didn’t submit data to U.S. News, but Penn’s law school did.

“Law schools are populated by extremely status-oriented people, both, frankly, the faculty and the students and, for that matter, the alumni,” Diver said. “So I knew that status was going to be driven by the U.S. News ranking.”

During his tenure at Penn, the law school’s ranking bounced around between 7 and 12. Diver never tried to quantify the financial effects of going up or down a spot, but he knows it mattered.

“Rankings were and are very influential in the decisions made by applicants on where to apply and what schools to enroll in,” he said. “That, of course, in turn, had a financial impact on the bottom line, particularly because most colleges still depend very heavily on what they call full-pay students — that is, students who can afford to pay the full tuition and fees.”

Diver learned a lot about what goes into the rankings. While he was at Penn, the law school changed certain things with them in mind.

“We altered our admissions criteria, as did almost all the other law schools, to give much more weight to an applicant’s LSAT score in choosing whether to admit them,” he said. “We did that primarily because that was what U.S. News was using to rank law schools. And I always sort of regretted that.”

Diver said that meant the school failed to admit really promising applicants who didn’t have impressive LSAT scores. He’s now the author of a new book called “Breaking Ranks: How the Rankings Industry Rules Higher Education and What to Do About It.” He said that college is a complex product and can’t be simplified into one list.

“To take all of the colleges and universities in this incredibly diverse landscape and put a single straitjacket template on them strikes me as insanity,” Diver said.

U.S. News & World Report says the rankings have evolved since they were launched in 1983.

“It was started to be able to provide transparency to the college process for high school graduates and families. It has since grown. It’s become more comprehensive,” said Eric Gertler, executive chairman and CEO of U.S. News.

Gertler said the operation is continuously evaluating what it considers as it compiles the rankings.

“We follow our journalistic mission, we make sure to live up to the highest levels of integrity. And in doing so, we know that we need to reflect what’s going on in higher education,” he said.

Gertler also emphasizes that the rankings aren’t the only resource prospective students should consider when choosing a college. “Globally, we do think that our rankings are the most comprehensive. We think we have the most rigorous process that we go through, but we also accept that it’s a start.”

It’s also a source of revenue for U.S. News, though the company won’t say how large. Viewing the rankings is free. A year’s subscription to U.S. News’ College Compass product — with access to more detailed data about the schools — costs $39.95.

It’s important to lots of schools that they be included in the list because it’s seen by many of their prospective applicants.

Nathan Urban, provost of Lehigh University, a private school in Bethlehem, Pennsylvania, said that if Lehigh didn’t participate in the rankings, many applicants wouldn’t consider or even know about the school.

Urban said he hopes students take the time to learn more about the school beyond its ranking.

“They are trying to compile a bunch of different kinds of information, whether it’s reputation, graduation rate, how much money you spend,” he said. “To reduce all that to a single number, of course, they’re going to miss things … and I think that college students have to recognize this.”

Back in Virginia, college consultant Jennifer Jessie has advice she gives to students as they navigate this decision.

Because it’s important to look beyond the numbers on a list — especially when the number you’re planning to spend is a really high one.