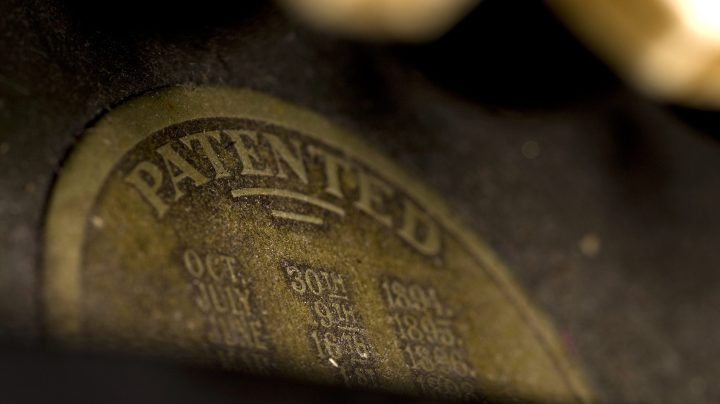 COPY
The first patent was granted in 1790. Since then, the Patent and Trademark Office has issued about 11 million. jammyphotouk/Getty Images

The first patent was granted in 1790. Since then, the Patent and Trademark Office has issued about 11 million. jammyphotouk/Getty Images
Listen Now

Cameron Gibson didn’t set out to be an inventor. He just had a passion.

“I grew up a music fan here in Austin, Texas, my whole life,” he said. “I started teaching myself guitar and music production in college.”

About eight years ago, that passion led to an idea for an app.

“A consumer platform that basically was built after what Bleacher Report had done in the sports world. So they personalized content to individual teams,” he said.

Gibson wanted to personalize content for users according to their musical tastes with an app called JamFeed.

“It’s a system and method for consolidating and aggregating content and then … analyzing it,” he explained. “So: Who is this content about? Can we tag it to a specific artist or a band or a festival? And then where does that content go to?”

This is exactly the kind of idea that the patent system is supposed to protect. The purpose of patents, according to no less an authority than the U.S. Constitution, is to “promote progress in science and useful arts.”

Since the very first U.S. patent was granted in 1790, the U.S. Patent and Trademark Office has issued more than 11 million others.

“A lot of that is due to the fact that we didn’t have the cash to expedite, like a lot of big companies,” Gibson said.

In other words, JamFeed could have paid an additional $1,000 or so to get its patent application to jump the queue. But Gibson was already paying his lawyers tens of thousands of dollars to handle the application, which is common, and he felt he couldn’t spend more. So he waited.

Mike Meurer, a law professor at Boston University, said all that waiting is a problem, especially for startup firms.

“You might get startups that try and fail dealing with a patent headache. Eventually, another startup will come along or maybe a big tech firm will do what the failed startup couldn’t do,” he said. “So I think the costs with the patent system are associated with delay.”

According to Melissa Wasserman, a law professor at the University of Texas, an examiner looks at an application for about 19 hours on average. That’s everything: reading the application, researching to make sure it’s novel and isn’t obvious, and going back and forth with attorneys on the legal language.

“So it’s not a lot of time when you think about it,” she said. “And the patent examiners we’ve spoken to have repeatedly stated they think they need more time to do a good job.”

The USPTO declined an interview request, but in a statement, a spokesperson said that on average, examiners spend 25 hours per application and that the average patent is granted in two years or less. That includes patents whose applicants paid for expedited handling.

Now that JamFeed finally has its patent in hand, Cameron Gibson said, the company can finally protect its intellectual property. He said there are multiple platforms using JamFeed’s patented technology to do the same thing his app does.

“We would be very open to a licensing deal,” Gibson said. “And let’s say, you know, best-case scenario, we get, let’s say, $1 million a year. That’s no equity. That’s not debt. That’s revenue.”

He said at that point the money he spent to get the patent and the seven years of waiting would have been worth it.