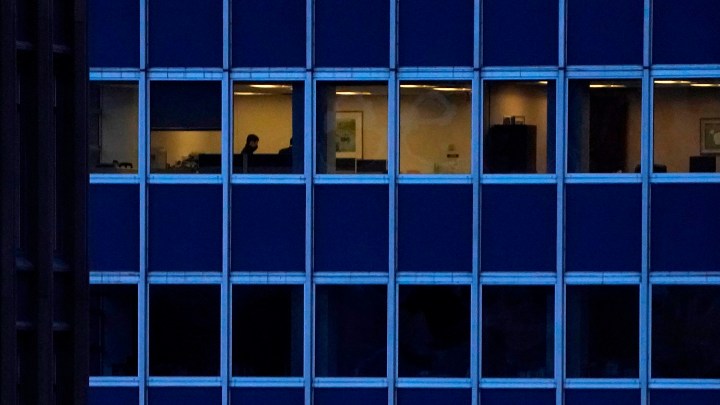 COPY
As the economy slows down, employers may gain leverage in their effort to bring resistant workers back into the building. Timothy A. Clary/AFP via Getty Images

As the economy slows down, employers may gain leverage in their effort to bring resistant workers back into the building. Timothy A. Clary/AFP via Getty Images
Listen Now

Apple is backtracking on its plan to have employees come back to the office at least three days a week. The San Francisco Bay Area is dealing with a COVID wave, but Apple also had to contend with resistant employees. The company had been trying to gradually ramp up its employee presence in offices before the idea was scrapped — for now.

It’s not the only company to still be negotiating the very testy line between the places we do our work.

So, on one end of the water cooler, we’ve got employers. “We’re big believers that the best work is done in person,” said John Replogle, who runs One Better Ventures, a venture capital firm focusing on health and wellness.

His team is mostly back in the office. “That nonverbal communication and culture, teamwork, trust are built face-to-face,” he said.

Three-quarters of human resources leaders say they’re having engagement issues with remote work, according to executive outplacement firm Challenger, Gray & Christmas. On the other side, there are employees.

“The typical person does wanna come in, they just don’t wanna come in five days a week,” said Nick Bloom, a professor at Stanford who studies remote work. “On average, in our survey data, they want to come in two days a week.”

For now, employers and employees are at an equilibrium, Bloom said.

“We’re still really in this cycle of, every three months, companies come out with their line in the sand, the date when everybody’s gonna return to the office,” said Andy Challenger, a senior vice president at Challenger, Gray & Christmas. “And then, as we approach that date, they have to back off of it.”

But what the job market giveth, the job market can taketh away. As the economy slows down, Challenger said, employers may get a little more leverage to drag us back in.